Even before the sun rises discordant beeps of car horns and the grinding gears of trucks delivering morning fare signal the start of a new day.

Sidewalks populate with workers, first just a few and then more, followed by shorts-wearing tourists until pedestrians on the sidewalks are shoulder to shoulder. Without breaking stride, people rushing to get to work on time weave past and between vacationing families who are staring down at maps and up at buildings trying to find their way, warp and weft making the ever-changing carpet constantly in motion. It’s another day in New York City.

How would a California skateboarder manage to get by? 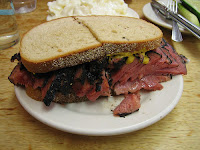 Rays of sunshine slip down in between grey skyscrapers dotted with rectangular windows that don’t open to the fresh air. Laborers yank thudding boxes of foodstuffs out of big trucks, past eatery managers and into delis and bistros, where they’ll soon be pastrami on rye  lunch for the crowd.

Yellow and black taxis speed by, their turbaned, bearded drivers smoothly navigatingdense, noisy traffic. A dogwalker on the sidewalk in worn sneakers and a denim baseball cap struggles with two leashes attached to Dalmations; many of these spotted dogs are deaf and maybe these two are and that’s how they get along in the clamor of the big city.

My nervous dogs would seriously freak out. 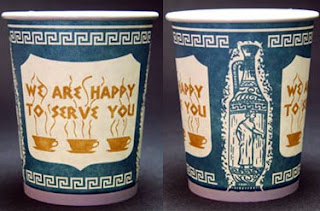 Starbucks on just about every corner offers mega cups of sweet, chemical-laden brew but a few New York City-dwellers still carry small, white paper coffee cups bordered with a Greek key, the last vestiges of a tradition that began in the late 1960s. The cup’s designer died two years ago and the Greek delis that offer them are also dying out but his iconic design still quietly says New York City.

I wonder, in another generation, will anyone be happy to serve us? Or remember that iconic cup?

Who would design a 843-acre woodlands-with-water-feature, castles, boats, carousel and mini-mountains smack dab in the most urban city in the world? Someone who knew how to make a city great, that’s who. Lovers on blankets embrace, couples row small boats and everyone walks walks walks or sits on benches having lunch in Central Park. It’s the center of the City, alright. 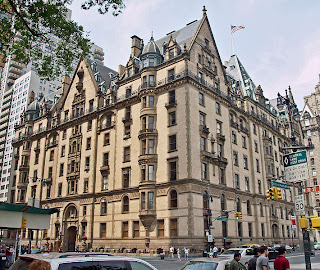 In my dreams I live overlooking the park in the high-gabled co-op apartment house called The Dakota, the place where John Lennon lived and died and Yoko Ono still has that apartment. The ghost of Judy Garland keeps company with those of Leonard Bernstein,  Rosemary Clooney and the multitude of other creative souls who’ve called the gloomy old building home.

Ah, in my dreams.

In my dreams we are young professionals driven by our careers and living in the City with a capital C, not San Francisco, which we call “the City” but the real deal, the Real City, New York City.  We stride to our high-powered jobs in tall, modern buildings. We talk fast, impatient to get it all out, to achieve, to accomplish and to win.

When day is done I pull evening accessories from a desk drawer turning day wear into night, M changes his tie and off we go to to a benefit dinner for MOMA, while back at our huge apartment, plastic bags in hand,  our own dogwalker takes the boys for their evening stroll. On the weekend we pack the dogs up for a trek to our place on the water, sitting in traffic, the NYC executive’s version of relaxation, knowing we’ll be on the same road, other direction, in just 48 hours, a vacation just as harried as the work week.

Of course, we do not live in New York City and never have. But if our life together had not taken the turn it did, we well could have and this would’ve been our life together. There are times when I grieve that we missed out, I’ll admit it.

But then I realize this: while the fantasy is lovely for a while, I’m not so sure we could have sustained this kind of life for very long. Or even lived through it. 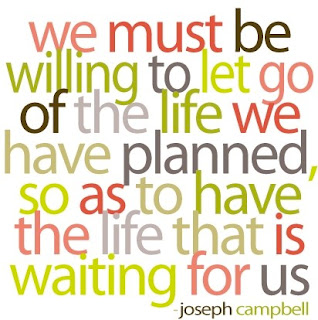 Which brings me to my point, which is that the Universe always knows exactly what it’s doing, operating in its perfection every single moment of every day.

So when this California and Florida girl needs to escape, she closes her eyes and rolls the tape of the New York City fantasy, and at the end, rewinds it …

… and puts it back in the recesses of her imagination, where it serves her best.

Because the life she has is pretty damn good.