Looking for an echo 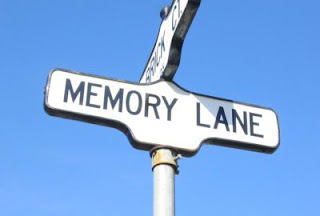 My thoughts on birthdays are simple: they’re better than the alternative.

Still, my birthday last month was a hard one. One during which mortality and I had a stare-down. The one during which I got hold of just how quickly time goes by.

Does it seem that way for you, too?

Some of it has to be about being back with M, which feels like a time warp most of the time. Imagine completely exiting a marriage in 1980 and picking it back up in 2009. No, I don’t think you CAN imagine it, because I couldn’t imagine it either. But it’s that kind of time warp. Unimaginable.

And part of it has to be my trip back to Rochester last month, seeing my favorite teacher and walking down Memory Lane to all of the significant places of my childhood.

A big part is a dinner M and I had with a (still) close friend from my childhood, a constant stream of “Remember when” and “remember who” punctuated with lots of loud laughter, his and ours. Could all of that really have been so many decades ago?

I had a note from a high school classsmate yesterday, someone I’d just been thinking about but hadn’t seen in more than 40 years. And that triggered memories of wild senior year parties at her house, and what it was like to be almost 18 and on the cusp of my life.

Kenny Vance sang: “Now we’ve turned into oldies, but we were newies then.” Yes.

I’ll be traveling back to those days here every so often, as I go through the many photographs I took while in my hometown last month.

How about you? Have you taken a trip back to your past?

Looking for an Echo / Kenny Vance & the Planotones

At Erasmus Hall High School, we used to harmonize

Me and Benny and Ira and two Italian guys

We were singing oldies, but they were newies then

And today when I play my old 45’s, I remember when…

We’d practice in a subway, in a lobby or a hall

Crowded in a doorway, singing doo wops to the wall.

And if we went to a party and they wouldn’t let us sing,

We’d lock ourselves in the bathroom, and nobody could get in.

‘Cause we were looking for an echo, an answer to our sound

A place to be in harmony

A place we almost found.

And the girls would gather ’round us, and our heads would really swell.

We’d sing songs by the Moonglows, the Harptones, and the Dells.

And when we sang “Sincerely,” we really sang it high.

Even though it was falsetto, we almost reached the sky.

And a lot of bad arrangements we’ve tried to harmonize.

Now we’ve turned into oldies, but we were newies then.

And today when I play my old 45’s, I remember when…

We were looking for an echo, an answer to our sound

A place to be in harmony

A place we almost found.

2 comments on “Looking for an echo”