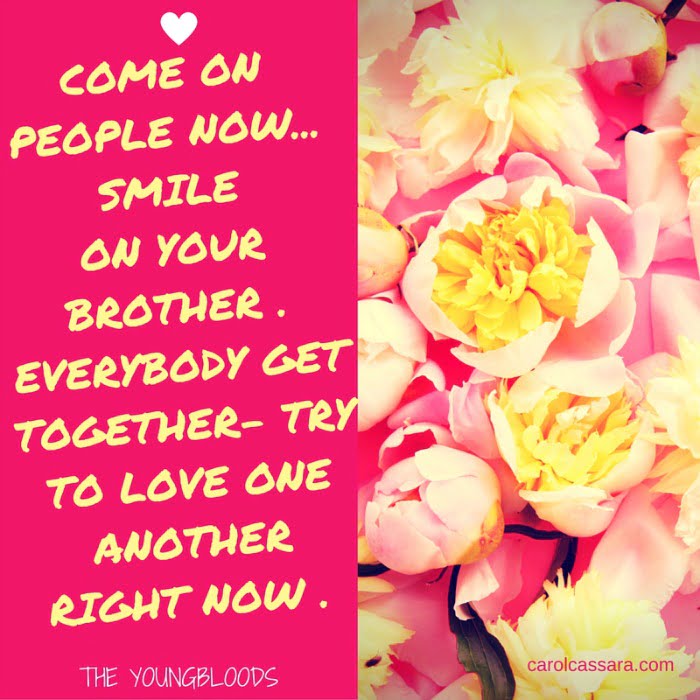 This song plays constantly while I’m in my car, giving me plenty of time to think about the concept of loving one another. Not to mention how loving our brother is reflected in the behavior of both people in the public eye and people I know. Or not reflected.

I have to admit that even as I charge ahead into my senior years, I’m still a little naive about people and their behavior and still taken aback when they say mean or ugly things or behave badly.

I can’t think of a time when I, myself, have ever acted maliciously. Does that sound arrogant? I don’t mean it that way. Sure, I’ve been thoughtless. But malicious? No. But it doesn’t mean that I haven’t had malicious behavior directed toward me, sometimes even by members of my own family. Malicious: intending to do harm.  You’ve probably seen some of this behavior in people around you, too. I hope you haven’t, but chances are, you have.

You’d think by now I’d have seen so much of it that it wouldn’t faze me, that I would have developed some effective armor, but, as my good friend P said not too long ago, “that Youngbloods song runs through your veins.”  I’m glad it does, even though sometimes I feel a bit unprotected.

Some may come and some may go

As the song played today I thought about a friend from back in the day…way back in the day, someone I knew very well. They acted badly toward someone that was in my life and by extension, toward me. It was childish, really, and they see that now and are terribly embarrassed. So embarrassed that they feel it has irreparably damaged our friendship. But here’s the thing: I don’t feel that way at all. Long ago, I forgave them and moved on. I understood the insecurities that drove this silly behavior but at the time it was quite shocking.

As the years passed I had reason to see them fairly often. When I did, I never thought about that incident at all. But they’ve “confessed” their bad behavior to someone else and said they feared it ended the friendship.

You’re probably asking, “if you believe in loving one another, why don’t you reach out?” Well, a couple of reasons.  This person is really not someone who likes to talk issues through and so I think it would be more effective if they made the gesture. If I made it, well, it wouldn’t really mean as much or do anything. Not really.

And then, the truth is that I’ve done my share of reaching out to people who behave badly and I’m not going to do much more of it. All that reaching out taught me one thing: if people can’t be kind to one another, seek common ground and understanding, what can I do to change that? Nothing.

If you hear the song I sing, you will understand

But look around. It’s campaign season and this election time we’re hearing politicians make some of the ugliest statements ever. It’s uncivilized. When that awful name-calling gets broadcast over and over on mass media, it can’t help but lower our society’s standards for decent behavior. I can’t even listen to the news these days.

And then, the people on social media who hop on the name-calling bandwagon? They turn my stomach. A few people I know on social media have unfriended anyone who is a follower of some of these vile politicians because they just don’t want to see that ugliness in their social media feeds.

Just one key unlocks the door

Younger generations sometimes like to make fun of the Boomer generation and I really can’t blame them for having a jaundiced eye. It’s not like we made major changes with the Love/Peace/Understanding mantra that was our hallmark. Ok, we passed civil rights legislation –but we failed to ratify the Equal Rights Amendment. While some behaviors changed, we still see the “isms” and worse in our society. The society that we are raising.  And as we moved further into our careers we made life decisions that were based on material values, not Love/Peace/Understanding. That mantra “faded in the grass.”

And so here we sit, living the last quarter of our lives, dealing with the results of our inability to create a civilized society, watching it degenerate into malice and insults and intolerance.

Was it all for nothing?

When I’m feeling hopeless about this, I close my eyes, and go here:

34 comments on “Love one another”