I’m kind of emotional, but at the same time, I lead with my head, rather than my heart. Not all the time, but a lot of the time. My brain chatters at me nonstop, even in the most emotional of moments.

So it’s good for me to do things that take me out of my head and into that part of me that is intuitive and acts more on feelings than thoughts.

That quest, a need, almost, took me to San Diego in mid-November, for a weekend of enlightenment co-hosted by Jamie Butler.  Well, ok, it was actually called “A Weekend of #*@! Enlightenment, but the reason is complicated. So to shortcut, let’s just say that I met Jamie through Elisa Medhus, the physician whose son left this life way too young.

You may recall I interviewed Elisa HERE. If you have a nice long afternoon and a hot cup of something dark, you might want to check out her blog, HERE. But seriously, it’s like a potato chip: you can’t stop with one post; you’ll find yourself sitting engrossed in the screen for hours. Do it one day. But first, read on:

(Caution: if you have fundamentalist religious beliefs, you may have an issue with this post. Please remember this is a judgment-free blog and I have no issue with people who disagree. Feel free to post your thoughts as your own but please do so without judgment.)

Jamie? Well, she’s a teacher and a medium. She’s been the catalyst for some of the most amazing experiences of my current life, I have to say.  So I was looking forward to the weekend, even though I didn’t exactly know what to expect.

Well, ok, to tell the truth, I had a major anxiety attack the night before my plane left, and I haven’t had one of those in decades.  Related or unrelated, I just don’t know. Probably related.

But in lovely Del Mar, just outside of San Diego, Jamie convened our class, some 20 open-minded and open-hearted people. 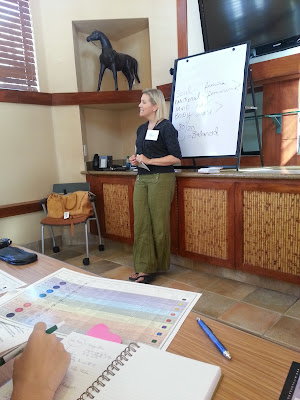 And she began to teach. 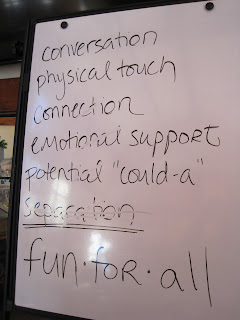 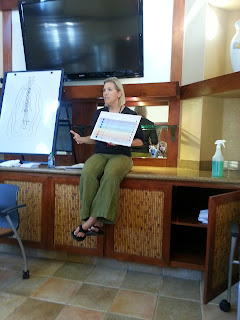 About chakras and crystals and colors and herbs. About life and about spirit. About fear. And she channeled. Boy, did she channel!

We talked a lot about energy and the vibrational quality of words. Followers of the Law of Attraction will understand what this means and for others, it means that if we say it or think it, we create it. Something I need to remember more often, because fears in my head sometimes run away with my thoughts.

In one of our more fun exercise, Jamie gave us body markers and had us write an affirmation somewhere our body. Whatever came to mind and on a body part that we’d look at and feel. Apparently, doing this has become a therapeutic regime for people who are ill.

Here are some of the things people wrote on their bodies: 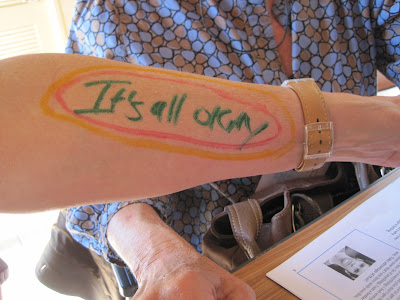 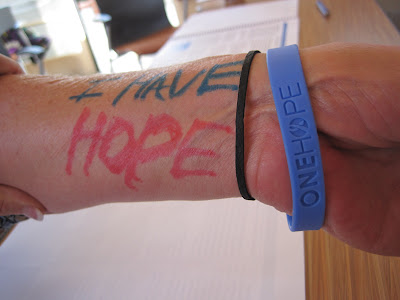 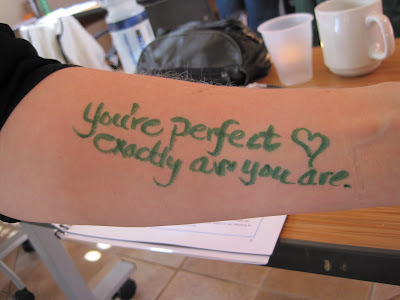 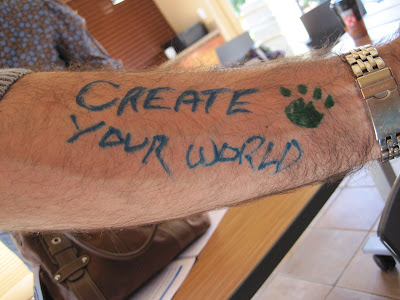 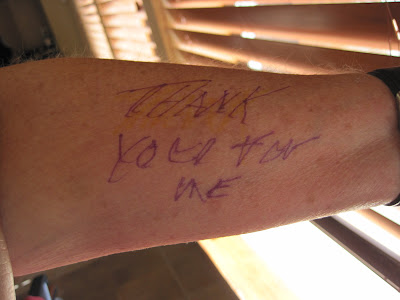 Mine said Be still and know that I am God.  Yeah, that’s what came up for me. On my arm. Apparently I could use some stillness (very true) and it’s no secret that I’ve been seeking to know God better for a long time. Just not in any traditional way.

Because I sit in my head a lot of the time, it’s hard for me to grasp that I actually could communicate with my deceased loved ones without the intervention of a medium. I do believe that I’ve heard from my family on the other side, and a bunch of times. But only with the help of a professional.

So it was a huge shock when my father arrived, on the second day, while Jamie was talking about funerals and rituals to honor the dead.  I was listening to Jamie when all of a sudden I sensed my father to my right, smiling and sending me love, so much love that it was overwhelming, a tidal wave of love and my eyes filled with tears. He stayed with me for some hours, just loving me, giving me support and telling me that he was my constant companion. Doing all the things that he found so hard to do in life.

It was so far out of the ordinary for me, so unexpected, that I had to write down as many details as I could so I could refer to them later and know that he had been there.

So yeah, pretty woo-woo.  In my world, this is normal, so please, no warnings about demons, devils and Christ.

I just hadn’t received a message like that without an intermediary. But in that moment, all the stars aligned and there he was.

In God Calling, Arthur J. Russell points out that “The Divine Voice is not always expressed in words. It is made known as a heart-consciousness.”  That’s exactly how it felt.

Jamie Butler is a gifted clairvoyant. If you’re interested in talking with her, check out her website HERE.  Or maybe you want to know a little about her first? Here’s her book, which you can order on her website or on Amazon, including in Kindle. A super-interesting read for those who want to know how clairvoyants notice their gift…and what they do with it. 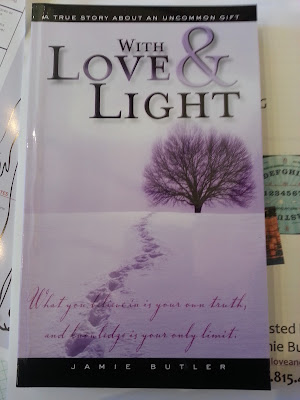 Jamie, Elisa & I are working on a little project together. Would appreciate your affirming us and thinking good thoughts that we achieve our goal. Thank you.

8 comments on “Love, light and truth”

2 Pings/Trackbacks for "Love, light and truth"