It’s fun to play the game “What other era would you have liked to live in, do you think?” M. and I play it from time to time and his answer is always the 1950s, when he was a kid and life was easy.

I’m fascinated by another era. The Forties.

There’s something about the 1940s that speaks to me.  Yes, yes, I know, the decade was marked by World War II and hardships faced by many people around the world.  But this is a game, after all, and the seemingly wholesome middle class life intrigues me. Even as people went through the war it looked like they really believed they were all in this together.  I wasn’t there, of course, but everything I’ve read indicates that there was real solidarity among people.

Family values weren’t a political statement. They were a way of life.

Was that a myth? Maybe. It could very well be a fantasy version of life in the 1940s, I don’t know.

But I do know that when the 21st century gets to be too much for me, I take refuge in the fantasy 40s.

I’m an ardent feminist and made the most of the opportunities afforded me by the feminist movement. No “I don’t call myself a feminist” apologies for me. I’ve always been out and proud.

But if I’m being honest, I have to admit that life seemed easier before that, at least from a societal perspective.  Roles were clearly defined and well-known and there seemed to be a certain security in that knowledge of gender roles.

I’m not going to kid you: coming of age in my corporate career just as the feminist movement took popular root was like bushwhacking through a jungle. Sometimes exhilirating, but it was also exhausting at times.

Sometimes I felt I had too many choices and I longed to rest in the security of a defined role.  I’m sure that surprises some of you who know me, but it is a fact.  I wouldn’t trade gender progress for the way things were, I’m just acknowledging that the path wasn’t completely smooth.

There are other things about the 1940s that I love:

Can we talk fashion? I love these crisp shirtwaist styles and pumps.

And the music:  click HERE to listen to this: 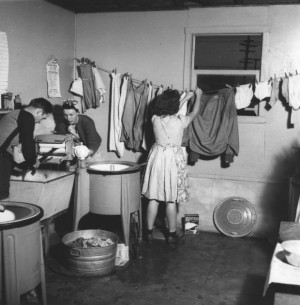 Of course, modern conveniences weren’t anywhere near as convenient as they are today. That doesn’t look like fun.

And disease was a bigger problem, at least some diseases. Life spans were shorter.

But to be honest? People seemed happier.

I look at these innocent teens and contrast them with those who recently cowered in a cafeteria while a fellow teenage student gunned students down.  An event like that would be practically unheard of in the 1940s. It was a more innocent time. A more wholesome time.

Yes, it was also racist and not so much fun for minorities. I get that.  I’m speaking only for myself and my fantasies.

There’s no question that our society was less materialistic. Television had not taken root, so we weren’t exposed to aspirations that were beyond our capability to legally obtain.

Movies were escapist: sappy and wholesome.

The other day I saw a TV drama in which a character was clearly performing oral sex on another.  And I’ve seen some horrific violence on shows. Is this really necessary on TV that young kids can access? What will be next?

No, I’m not a prude. But as each year passes our society goes further off the rails and I have to believe it’s related to media.

It wasn’t a perfect era, but it’s one that fascinates me. I never tired of reading about it.

How about you? Is there an era in which you think you might have liked to have lived?