Mad Men: what’s a woman worth?

Sunday’s episode of Mad Men surely raised the eyebrows of today’s young professional women, who have grown up with the idea that competence is rewarded and women don’t have to use their sexuality to get ahead.

Here’s what happened:  The agency was desperate to get the Jaguar account. Knowing how desperate the account team is, one of the Jag dealer honchos expressed a desire to sleep with the beautiful, buxom Joan. Joan was against it at first (so was Don Draper) and then traded her body for a stake in the agency and partner status. I have to admit, I was shocked, at least at first. Not that the sleazy male partners so casually gave her up for an account, but that she did it.

Meanwhile, Peggy’s status as head copywriter hasn’t protected her from unmistakable biases against women in her agency. Don (who had been her greatest champion) blew up when she tried to claim her rights and, shockingly, he threw a fistful of money (bills) at her.

That’s the straw that breaks the camel’s back. Peggy sees that no matter how hard she works, and she works plenty hard, she’s never going to be respected as much as the men who work for her are. She accepts a position at another agency. As she gets ready to give notice, she learns that Joan has been made partner.

It may seem somewhat far-fetched to young people that a woman would be pimped out to a client to land an account, but that kind of scenario was not uncommon in the 1960s and to some extent, the 1970s. I saw things like it happen at places I worked.

It might also seem strange that Peggy’s competence and hard work wouldn’t be rewarded or valued in the same way that men’s work is. But again, I’ve seen that dynamic at work — even in the 21st century. 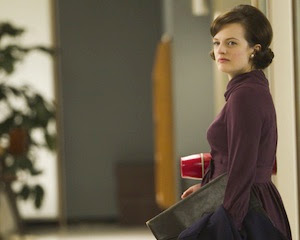 Peggy quit the agency in a final scene that had to be one of the best so far in a series full of bests. She walked into Don’s office and resigned in the most graceful and emotional way possible, written and acted superbly, all in subtext.

In the final scene, she looks around her office, picks up her coffee mug and red thermos and heads out to her future.

Mad Men raises the question What is a woman worth? and then answers it: Not as much as a man.

It’s still true today, but in subtler ways. And that’s the beauty of Mad Men. Matthew Weiner and his skilled writers never fail to skewer our society and our culture when it needs it.

And of course, it’s a reminder that, although we’ve come a long way, the emperor still has no clothes.

What do you think?