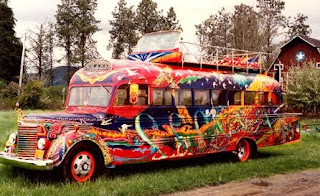 It wasn’t the Merry Pranksters’ Magic Bus, which probably would have made it a better way to travel. I mean, Ken Kesey was a great travel agent.

This was our first experience with the bus tour and it had advantages and disadvantages.

On the plus side:

On the negative side:

The trip home was grueling. Such a long layover and two very long flights. But until teleporting becomes feasible, we’re stuck. We’re suffering jet lag now and are sleep-deprived.

We’re glad we did this trip, and it was a great way to taste the two countries. But we can get the benefits of a tour without the disadvantages by cruising (our hotel moves with us), and that’s probably what we’ll do next time.

No question we want to return to Dublin on our own, maybe for a week or so. It’s a fairly easy trip and we can probably do it on miles.

I’m not sure there’s enough in the Scottish Highlands to keep M. interested. But for sure, when I need to relax, that’ll be the place I go in my mind.

My littlest dog is following me around. In fact, I got up at 2a.m. and he followed me to the bathroom. I guess he was worried I wouldn’t come back. He’s also been naughty this morning. Of course. His “aunties” (our petsitters) made him toe the line for two weeks. Us? Hopeless.

M is catching up on conference calls.I’ve got a huge load of wash in, the first of several. I’ve fed all the dogs, mainlined coffee and paid bills, and it’s not even 8a.m. in California.

It’s good to be home.