Marhaba! a warm welcome to Morocco 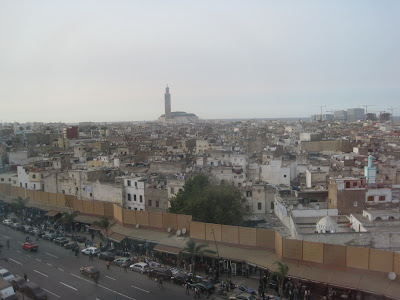 At SFO, the Air France counter clerk affixed CMN tags to our bags, then looked up and said “You’ll pick up your bags in Casablanca.” It gave me a little thrill to watch the conveyer belt take them out of sight and know that the next time I saw them I’d be in Africa.

I slept one hour on the flight to Paris,but I did read almost two entire books and watched a movie, The Ides of March. Liked it. It wasn’t until the flight attendants on the Casablanca flight did their announcements in Arabic that I started to get really excited.

And then, hours later, landing in Casablanca, signs in Arabic—and a 45 minute ride to our hotel in the city. On this day, cool breezes through tall palms and filtered sunlight greeted us. A nice day. Our driver dodged and weaved through bicycles (at least two riders each), mopeds (usually three riders, including babies), pedestrians, buses, a variety of brands of car and truck and even a horse drawn cart or two.

Along the way, shepherds tended flocks, some walking with long staffs, as they have for centuries, others reclining on the ground for a bit as the sheep grazed. A modern prison with barbed wire atop its walls lay just outside the airport grounds.

Beautifully-kept walled estates sat next to ramshackle, abandoned ones. Or were they? Did people live there? Because they certainly lived in some of the rundown apartments and shantytowns we saw.

As we approached city center, our driver pointed out the upscale neighborhood, aptly named California. Made us smile. Traffic was crazy, random, a free-for-all, with horns blaring, exhaust and dust. 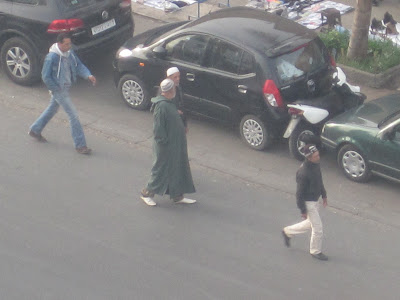 It was a lot for an exhausted traveler like me to take in. 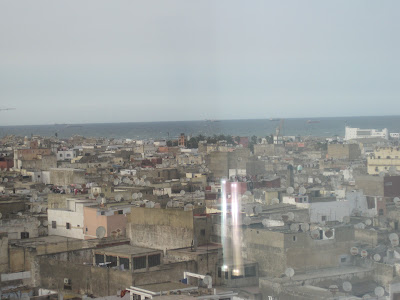 Casablanca’s on the Atlantic Ocean, and we can see it from our room. See? We’re at the big, ugly American hotel in town, and after passing some of the other rundown accommodations en route, we’re happy to be here. No joke.

We’re on an A&K tour and I have to admit I love how they ran us through customs—our airport VIP greeter took our passports, was gone 15 minutes, got them stamped and then walked us past the hundreds of people waiting for their stamps. At customs, the official asked us to run one of our small bags through a screener, just as a token, he wasn’t even watching, and after we did, he waved us through. Our luggage was up promptly and our driver met us as we walked out of the airport. We were on our way to the hotel before the rest of our flight had gotten to customs. I’ve never seen anything so smooth and if that’s the way the trip will be run, it’ll remove most aggravations and leave us free to simply soak up what we see, hear, taste and read.

Sightseeing begins in the morning and plan on photos and blog posts as we go.


Meanwhile, a few photos from our Casablanca hotel room on the 8th floor. I’m off for a soak in the huge tub and then, I hope, a long and restful sleep so I’ll be ready to go in the morning. Thank you for following along–or as we say here, Shukran!

2 comments on “Marhaba! a warm welcome to Morocco”