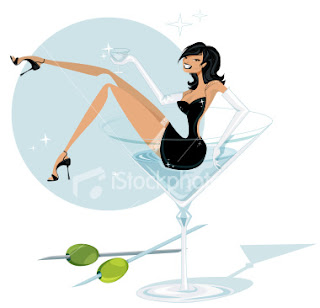 I like to have a martini,
Two at the very most.
After three I’m under the table,
After four, I’m under my host.
-Dorothy Parker

Back in the day, I had gel nails. Every two weeks I’d present myself at the home-salon of an enterprising Vietnamese woman who, for $19 cash plus tip, would do an immaculate French manicure. She was the manicurist of choice among my friends, she thought she was a nail goddess, and truth is, she did a great job. {But really, there are few things worse than an arrogant, egotistical manicurist. I mean, really. It’s NAILS, not curing cancer.}

The thing is, you have to keep gel nails up every two weeks and that wasn’t always convenient.

Then logistics got more complicated and I decided I didn’t need gel nails. So, now I do my own regular manicure and (usually) a terrible job of painting them with fun colors: teal, hunter green, purple, taupe. Hot pink, coral, red. Or don’t paint them at all.

Oh, every so often I’ll go to a salon. But the good ones want $25-30 for a regular manicure, and I won’t pay it. And the cheap ones? Well, last year I grabbed the file out of the hands of the very bad manicurist that was working on me, finished myself, then paid her in full and walked out without polish. {Shudder.}

I haven’t found a reasonably priced regular manicurist. Plus, I have to admit, even short manicures are inherently boring to sit through and seem like a big waste of time. 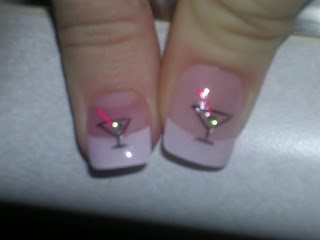 Then I came across a promotion by Hotel Valencia at Santana Row. Martinis and Manicures. For a mere $20, a manicure and a martini. They encourage women to bring friends.

It’s genius. And it’s once a month.

I was disappointed that my girlfriend and I couldn’t go this week, as it’s sold out. So is April. But we’re confirmed for May.

Martinis. Manicure. and Much talkin’. My kinda event.

{Don’t worry. I am not going to have little martini glasses painted on my nails. Puh-leeze! Nor will you ever find me under the host. I don’t think. Well, maybe… it depends who’s hosting….}