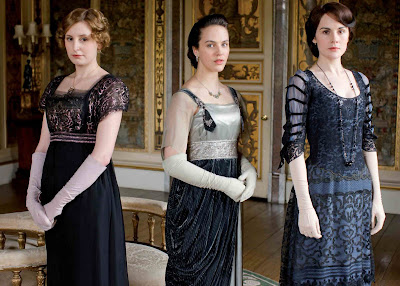 A terrific British miniseries, Downton Abbey, was replayed on PBS Masterpiece the other day.

Downton Abbey is much like the beloved old series, Upstairs Downstairs, only the characters are much nastier. Both upstairs and down.

I love period pieces that take us back to a different day and time and give us a chance to reflect on what’s different now. And what’s the same.

On Downton Abbey, I was struck in particular by the middle sister, Lady Edith. Edith feels she’s been overshadowed by her older sister, Mary. Out of jealousy, she ruined Mary’s prospects at marriage by sending a letter revealing that her sister had perhaps….well, let’s say…. “not been virtuous.” In Edwardian times, a woman’s virtue was important to her marital prospects and if a woman’s marital prospects were ruined, so was her life.

So Lady Edith was the ultimate Edwardian mean girl.

This is a seriously mean-girl scenario. It’s familiar to me and maybe to you, too.

It’s a sad fact, but true nonetheless, that there are people in this world who do not wish us well.
Maybe, like Lady Edith, they compare themselves to us and our perceived abundance reinforces their perceived lack.

So, what are we do to do with those who attempt to actively work against us?

Lady Edith’s sister, Mary, took revenge, as in an eye for an eye. She managed to keep Edith from getting a marriage proposal Edith really wanted. But revenge is nasty business, in my opinion, and that kind of negative energy just isn’t worth it.

So what to do?

I read something the other day that seemed like a better way. When we encounter someone who means us harm, it advised, we should treat them as though it were their last hour on earth. Compassionately. Because negative energy really is a disease. Destructive.

And for some reason, a passage from the Desiderata keeps coming to mind:

If you compare yourself with others, you may become vain or bitter;
for always there will be greater and lesser persons than yourself.
Yes. Always.

So don’t sweat it.

Oh, and P.S.: Season Two of Downtown Abbey starts this weekend. It’s set on my DVR.