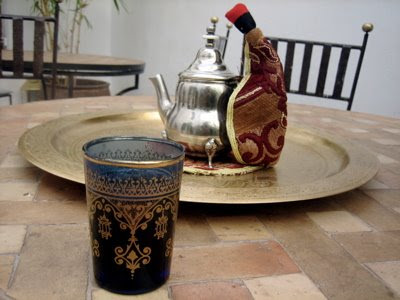 When I lived in the South, iced tea was a restaurant –and social –staple.

“Sweet or unsweet?” waitresses would drawl, and even though unsweet is not really a word in other places, it was in the South.

Iced tea was also the first thing my former mother-in-law offered us when stepped through her front door to visit. {She was from Alabama.}

Green tea is a staple in Morocco, too. Minted, and served steaming hot in these beautiful patterned glasses.

It’s called atai, and I’m told its preparation varies from region to region: sweet in the north, less sweet (if not unsweet) in the south. Lemon verbena is sometimes added. Always steaming hot.
Our guide tells us that modern Moroccans are health conscious and take far less sugar in their tea today than ever before. But it’s delicious, even with less sugar.
The usual variety is gunpowder tea from China. {I hope that’s not literal.} Pouring it from on high gives it the traditional foam topping. Traditionally, it’s served three times. Each glass tastes different because it’s been steeping a different amount of time, as represented in this famous Moroccan proverb:

Mint is cultivated here with an abundance of help from pesticides. I’m told that today, many Moroccans forgo mint with their tea for fear of the adverse effects of pesticides on their health.

Ah, even the oldest traditions must be adapted to current day realities. Even here in North Africa.