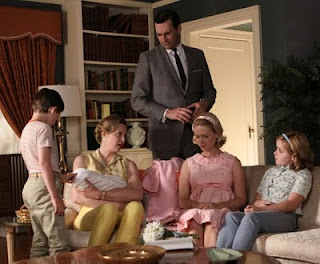 I am a fan of the TV show Mad Men and was thrilled when Season 3 arrived on Netflix.

It has not disappointed.

The characters are very richly rendered. But one aspect of the series puzzles me, and that’s the cold treatment of Don and Betty Draper’s kids.

Especially by Betty, who seems quite a cold fish and not likable as a wife, mother or person.

Compared to today’s standards, when parents relate (and over-relate) to kids as part of their parenting “job”, the difference in child-rearing is stark.

It’s clear that, at least for Betty Draper, children are to be seen and not heard, and certainly not seen that much, either.

The kids are basically ignored and treated as irritations and afterthoughts.

Maybe that’s the way it was back then.

I was raised in the 1950s and 60s and I can’t remember a single instance of my mother sitting down to play with us. Or engaging with us on any real level.

Was that true for any of you raised in that era?

Has child-rearing changed that much in two generations?

Seems like the pendulum theory’s at work: the far ends of the swing are the most extreme, but there’s always a middle place, at least temporarily.

I’m just not sure where that is and if we’ve seen it. If you have any thoughts on this subject, I’d sure like to hear them.