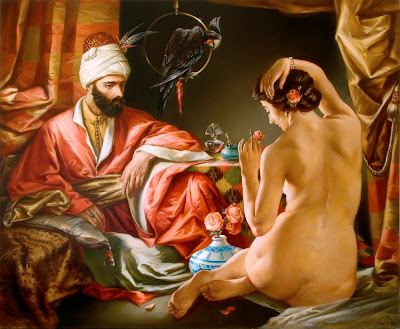 “My father had four wives,” our dinner host told us one night in Morocco, “and 17 children. I am number 13.”

A harem. Courtesans in jangling, jeweled waist chains, diaphanous pants and veils being waited on hand and foot by servants as they, themselves, wait to serve their sultan.

That’s what it was like in an imperial harem, where most of the concubines led lives of leisure.

The sultans were busy guys: One, who lived from 1672 to 1726, apparently fathered some 700 sons and 342 daughters by more than 500 concubines. In comparison, four wives and 17 children don’t seem like much.

But that’s not the kind of harem our host referred to. The more common harem –the kind our host lived in– was a domestic harem. Quite different.

Far from being an exotic palace for concubines, a domestic harem referred to groups of extended families that lived together within a walled courtyard. Women were sheltered and in the old days, which means before the 1970s, rarely ventured beyond the walls. That’s the kind of harem in which our host in Fes was raised. 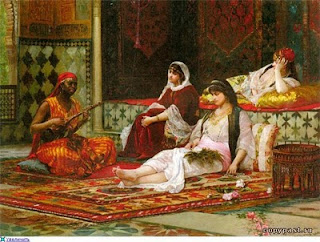 Not your cup of tea? The domestic harem reflected the Muslim world’s complex social structure, something we don’t know enough about here in the U. S. of A.

Fact is, we don’t know enough about the Muslim world at all, and what we know has been colored by our biggest experience with it: terrorism. It’s fear-based. Like so much else in the world, the truth has been buried by people who have twisted the original intent of their faith and by fear-mongers who believe that they can scare people into giving up their power–and their rights.

I’m glad to have had this opportunity to learn more about a culture that’s so foreign to me.

Oh, and I asked our host if he had a harem. After all, he did invite us to ask him anything we liked.

I couldn’t help but think a rose by any other name….