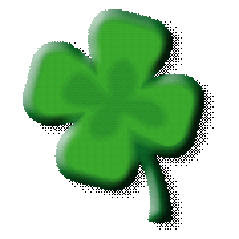 No one likes to think that someone wishes them ill. But it happens. Mala suerte, in Spanish. Bad luck.

Usually people like that feel that someone else’s good fortune takes away from their own. They think there’s only so much good fortune to go around.

Or they just want someone to fail as some sort of revenge.

I’ve had all sorts of warm wishes on my new venture. But one person in particular had an interesting approach. He strongly suggested that my partner and I go after one specific and quite narrow market.

Now, this is a person who knows a little something about sales and marketing. As do I. He would clearly know that this market is not as lucrative. Would not have as much visibility or even “prestige,” so to speak. Far less revenue potential.

It was clearly bad advice.

This person wants us to fail.

And it doesn’t take a seasonal four-leaf clover for my partner and me to know that our market opportunity is pretty broad.

I never recommend being suspicious of people’s motives. But sometimes they are just so obvious that you can’t miss them. Even though they think they’re being subtle.

It’s good to pay attention. Keep your friends close, and your anemones closer.