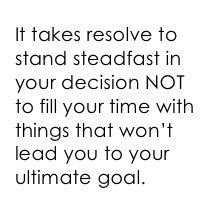 People talk about finding their lives. In reality, your life is not something you find – it’s something you create.”
– David Phillips

We all know people who “stand still” in their lives. They just don’t seem to get anywhere. Sometimes it’s because they’re paralyzed, afraid to take a step. Other times it’s because they’ve told themselves the same story about their life for years and they hold on to that story long after the Universe has made clear that a new story is called for.

Sometimes people are just unconscious, moving through life without thought, at the mercy of events and others.

I, too, have been guilty of filling my life with things that don’t move me forward. It’s certainly easier to just be pushed by the current.

Sometimes, you just might need the rest. But other times, going with the flow doesn’t support a healthy life.

It’s good to ask yourself every so often, “Where’s the road I’m on leading me?”

And to not only consider if another road might be more helpful, but to take that other road.

Even if it’s a new one, and maybe a little scary.

It’s important not only to embrace life, but to shape it, mold it and create it.