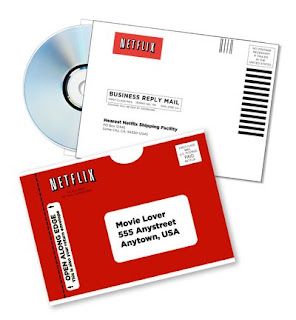 We’ve all seen those red envelopes sitting in the outgoing mail, haven’t we?

For some years now, I’ve paid less than $20/month and gotten at least 3 movies a week from Netflix by mail. In any given month, that is 12-15 movies, watched in the convenience of my own home, at an hour that I choose.

I think Netflix has distribution centers set up in key cites, near post offices, because if I return a movie on a Tuesday, usually by Thursday I have a new one.

Of course, there were some lawsuits a few years ago when Netflix began to slow down power-users like me. They didn’t like our quick turns–it was expensive for them.

Netflix is a particularly good way to watch entire series either at a sitting or over a few days. HBO and Showtime, especially, since I don’t get premium channels.

In the past year or so, Netflix has begun to offer something called “Watch Instantly.” It allows you to watch a movie on your PC. Or you can watch on your TV.

I look for some changes ahead in Netflix, but I have to say that it was a brilliant idea and one that I’ve been a fan of since the start.

Goes to show you that Silicon Valley isn’t completely obsolete.