Nienie on beauty: up close & personal 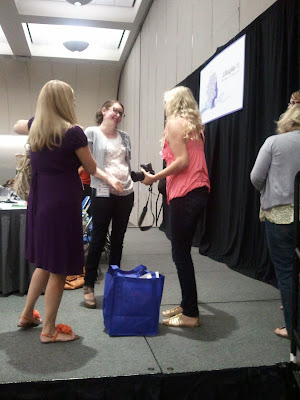 Beauty and body image are big topics today. Cosmetic surgery, fillers, injectables and a wide variety of skin potions, body padding, Spanx and cosmetics testify to women’s desire to look young and perfect. Even when we’re older and not so perfect.

“We need to start believing that there are no flaws, only differences,” said a panelist at BlogHer11’s discussion of beauty and body image. And no one epitomizes that more than panelist Stephanie Nielson. That’s Nienie, in the center above, and second from the left, below. 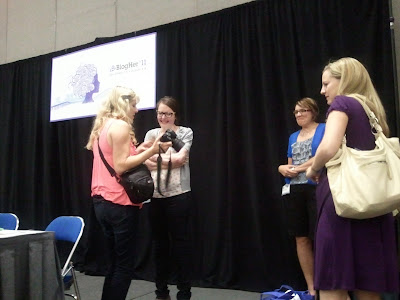 I wasn’t going to attend this panel. There was another one at the same time that would’ve been more helpful. But, I figured, why miss a chance to see Stephanie Nielson? I “know” Stephanie through her blog, The Nienie Dialogues. Well, actually, I met her Saturday afternoon, and she’s delightful.

She was genetically blessed: always a physically beautiful young woman. And then, a few years ago, she and her husband were in a small plane that crashed. They both survived, but were horribly burned. Her burns were seriously disfiguring.

Stephanie was lucky to escape with her life. But because she was so severely scarred, her long road to recovery wasn’t just medical. It was psychological. Imagine looking in the mirror and seeing only burn scars. Or the stares she receives when she’s out in public: once because she had a beautiful face and now because she is disfigured. Imagine knowing how much restorative surgery is ahead,

Nienie told us her that her outlook on herself and the meaning of beauty changed. Today, she says that as long as her husband and kids love her, what other people think doesn’t matter. Her story certainly contrasts with those women who have had cosmetic surgery so that they can all look like the same version of Stepford wife. 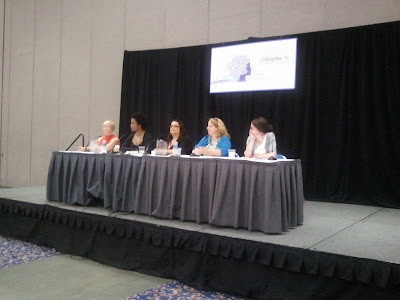 The panel. Names you might know: Jess Weiner, third from left, who works with the Dove Body Image campaign. Stephanie Nielson, who blogs the Nienie Dialogues, far right.

The panel had a lively discussion about beauty, body image and self esteem. Unfortunately, such a large panel meant everyone had a lot to say. So we didn’t hear as much from Stephanie as I would have liked. Actually, I think she could have been the only speaker and the audience would have been rapt.

I’ve read Stephanie’s blog for years, but now that I’ve met her, I can say this:

She talks with her beautiful eyes.

She has a gorgeous smile.

She is one of the nicest human beings I’ve ever met.

And yes, she calls her handsome husband a “cute boy” in person, just as she does in her blog.

I’m one of the many who admire Stephanie and believe she has a lot to teach us about life, family, beauty and about spirituality.