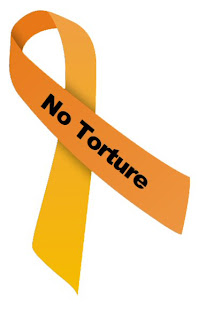 You can look at the story about medical workers monitoring prisoners who were being tortured a couple ways.

You can look at how much worse it might have been for the prisoners if there were no one advising when to stop. Or you can say they violated medical ethics.

The phrase, “first do no harm,” actually doesn’t appear in the Hippocratic Oath. And even if it did, these workers weren’t actually doing harm. They were preventing death.

How about that they’re obligated ethically to act patients’ best interest? I would say they did—–telling torturers when to stop.

Although it distresses me that they were put in this position.

The charge that they did not preserve the patients’ dignity is valid in my view.

But the real question here is about torture. Americans justify it the same way that they justify capital punishment. You hear it all the time on Conservative News Network (Fox TV):

If our guys were tortured, their guys should be tortured. They deserve it. An eye for an eye.

It’s the basis for a whole lot of not-so-thoughtful opinions. Knee-jerk vengeance.

Now let’s go bigger: Is it justifiable to torture “the enemy” to get information out of them? Information that may save American lives? This was the big sales pitch after Sept. 11. Saving American lives.

That’s a tough one. What if were MY life being saved?

There are no easy answers. But let’s be clear about what we’re talking about. Torture is unspeakable violence.

Those against torture point out that it violates human dignity. That prisoners are vulnerable and it mistreats the vulnereable. That it violates the demands of justice. Dehumanizes the torturer. Erodes the character of the nation.

And that it gives governments too much power. There is no question that the Axis of Evil (Cheney, Rove, and W) leveraged Sept. 11 to get more and more power. Which they used for evil purposes. Which is why torture in the Bush regime distresses me so.

Here’s the opinion of someone who knows a little something about torture. I’m no political fan of his, but Sen. John McCain was a prisoner of war and was tortured.

It’s very telling that he led the Republican charge against torture. Here’s what he said:

“…(torture) isn’t about who they are. This is about who we are. These are the values that distinguish us from our enemies. What I … mourn is what we lose when … we allow, confuse, or encourage our soldiers to forget that best sense of ourselves, that which is our greatest strength—that we are different and better than our enemies, that we fight for an idea, not a tribe, not a land, not a king … but for an idea that all men are created equal and endowed by their Creator with inalienable rights.”

I am a pacifist. I am firmly against capital punishment. And I am disturbed that our government went against the Geneva Convention, in which we agreed not to torture POWs and enemy civilians.

There are no easy answers to all this, especially if lives could be saved by information prisoners get. But W and his ilk abused their power and as a result, some soldiers thought torture and humiliation were funny. Who can forget those photos of Arab prisoners? Ignorant, immature soldiers. (The volunteer Army…don’t get me started.

It disturbs me that we are an increasingly vengeful society.

An eye for an eye doesn’t deter a thing. It’s simply punishment.

One other thing I know for sure:

It dehumanizes us to kill and torture. On that, I agree with Sen. McCain.