No longer waiting to exhale 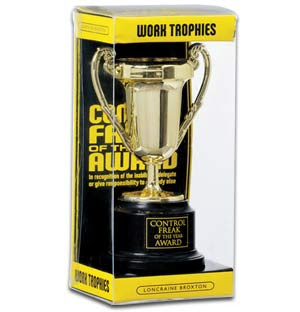 A popular book a couple of years ago was titled Waiting to Exhale. I thought about it today when I considered the concept of relinquishing control.

By nature, I’m a control freak. In fact, my name is inscribed on the CFWoF (Control Freak Wall of Fame). If you’ve spent the better part of three decades in charge of your own life, then for sure you have developed this skill, or if you prefer, trait, as a means of survival.

When you have to be in charge, you do spend a lot of time holding your breath. Hoping things turn out the way you want them to. That the decision is sound. Because one thing you do not have is someone invested enough in the decision to be an effective sounding board.

Now, FLH (First & Last Husband)is an in-charge kind of guy. He is nothing, if not decisive. He has a clear sense of what he wants. And makes it happen.

Oh, he humors me. But in the end, it usually ends up his way. He is masterful at it.

So, you’d think that after all these years in control, I’d buck back.

But, as they say in Miami, No, claro que no!

Because it is soo wonderful to have someone else competent share (or even carry) the burden of major decisions. And, fortunately, we are aligned on most major issues. After all, we come from the same culture. The same self-deterministic immigrant stock. We get each other.

At first I was a little taken aback.

But then, I exhaled.

And with that breath went the huge weight that’s been on my shoulders since our divorce.

I am, to be literary about it, no longer waiting to exhale.