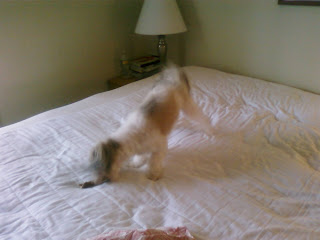 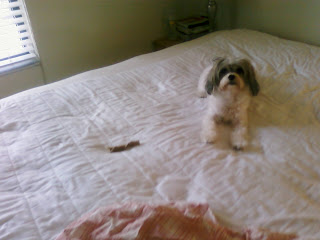 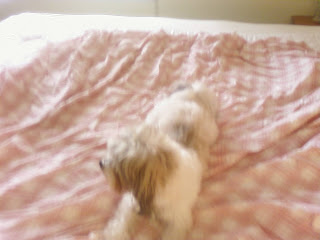 My three-day fever finally broke this morning. Dr. K. sure knew what he was talking about–this was BRUTAL. I haven’t been this sick since the mid-1990s. Except for that bout with pneumonia around 2002. That’s how often I get sick–rarely–which is why I remember them so well.

I’m a terrible patient. An impatient patient. So it’s a good thing FLH was in Miami, checking in by phone. And thanks for the girlfriends, who offered chicken soup, shopping, to sit for Riley and who dropped off escapist fiction.

Riley was mostly patient with me. Although there was no escaping that look of concern on his face, especially when I coughed. So he came and sat on my chest.

I’m finally feeling a bit more human. So I thought some clean, fresh sheets were in order.

Nurse Riley decided to lend a hand. And a chew bone. Which is why it took twice as long.

The chew is missing. I suspect I’ll turn over in bed and find it later.

But really, for an energetic little dog, he did great as a nurse.