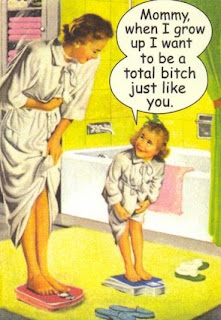 Thanks to Hulu, I had a chance last week to catch up on the train wreck that is the Real Housewives franchise on Bravo TV. I caught the last couple episodes of Orange County and the first two of New York.

When you watch the shows in the aggregate, gorge on them (so to speak), it’s clear that the only content for any of these shows involves the women sniping meanly at and insulting each other.

At the beginning of the series, there were story lines. Each woman was dealing with stuff in her life and the series was about how those situations evolved and resolved.

Now, it’s just conflict and infighting. There IS no other content. There is absolutely no substance.

And we are riveted to these mean girls like we can’t look away when we pass an automobile accident.

Now, the husbands and boyfriends have gotten into the act. In the past, they held themselves above the fray. No more. They’re in the thick of it now on both of those franchises. (The new season of New Jersey hasn’t started. I kind of doubt Italian-American men would participate in the drama. It’s not their style. But we’ll see. And the Atlanta men have been invisible.)

So, look. We all have bad moments. Bitchy moments. Episodes in our lives that we’re not very proud of. All of us.

I think the “Housewives” (and I use that term loosely because few of them are actually housewives) get paid something like $150,000 per season. That’s a nice chunk of change, but not nearly enough to convince me to put my worst moments on national television. 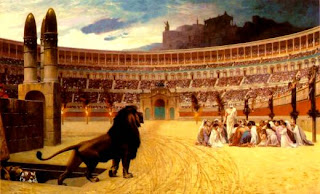 In recent years, our national entertainment has reminded me of the Roman coliseums. Of Christians being thrown to lions, while crowds cheer the battle on, cheering even harder when blood is shed.

The housewives all seem like lions to me (even the sanctimonious so-called “Christian” girl, Alexis, who bought herself a pair of industrial-sized knockers that she displays like two Girl Scout badges).

So it’s more of an even match as they fight to the death. (In this case, death is usually coming to your senses and leaving the series to resurrect some semblance of a normal life.)

But the episodes left a bad taste in my mouth.

The way women are depicted is embarassing. These women have sold their dignity to Bravo.

And the fact that this terrible stuff entertains us reflects the worst of American culture.