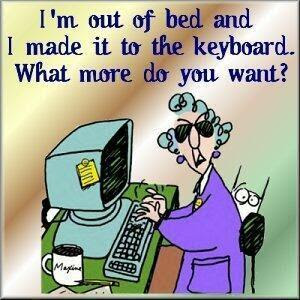 Everyone wants to be a writer.

If they aren’t blogging, they’re microblogging. Or they’ve got their own website. Or they write amateurish or lugubrious poetry. (I’ve been guilty of that a time or two, myself)

Some of it’s amusing, in a “reading someone else’s journal” kind of way. Some of it’s infuriating, as in political rants.

But real writers are few and far between.

I was looking at Narrative magazine today and appreciating the beauty of great craftsmanship. Making the prose sing on a page.

Those of us who enjoy good writing all know writers with great talent but no discipline. With fantasies of being a writer, but unwilling to cut and hone and work at it. To learn the craft.

My friend, Gary, is a great writer. He’s published a very well-received memoir that I read parts of when he was writing it. I did it as part of the Internet Writing Worskhop we both belonged to. (Which I haven’t belonged to in a few years due to schedule constraints. But plan to join up again soon. It was the most productive I’ve been at writing, ever.)

I call him a writer’s writer, because he likes the interplay of words. He’s been using his Facebook posts to indulge that lately, and it’s fun to read.

But I’ve digressed. What I mean to say is this:

When I read really strong writing, that displays real knowledge and mastery of the craft, I realize the difference between simply having talent, and using it.

Between standing still and actually doing something.

I think it’s time for me to use mine.