Out of Left Field 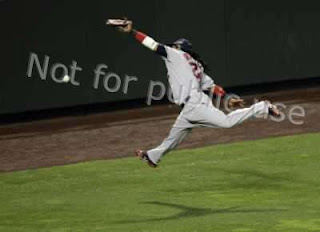 I was thinking today about balls that come out of left field, and the characteristics of a good left-fielder. Because outfielders have to cover a lot of ground, speed, instinct and quick reactions are key.
A good left-fielder must be able to catch fly balls above their head and on the run. They’ve got to throw well over long distances and they have to be able to judge whether to go for a tough catch and risk letting the ball get by, or to instead allow the ball to hit the ground to guarantee a swift play and prevent the runners advancing.
Although it seems far from the action, left field is complicated. A good outfielder has to know the ins and outs of foul territory. I read that left fielders often have the weakest arm of any outfielder, as they generally don’t have to throw the ball as far to prevent the advance of baserunners. But they still require good fielding and catching skills, and usually receive more balls than the right fielder. The left fielder is also very much a team player, backing up thirdbase on pick off attempts from catchers.
I have, at times, felt like a left fielder. Actually, a pretty good one. But it’s a tiring position and one I’d like to leave real soon.