Palm Sunday: the myth, the magic of Christianity 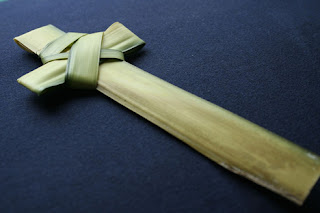 “Took branches of palm trees, and went forth to meet him, and cried,
Hosanna: Blessed is the King of Israel that cometh in the name of the Lord.”
~John 12:13~
Well, of course, there is disagreement
about whether they were actually palm fronds.
Matthew doesn’t specify, but John does.

Still, Palm Sunday is part of the magic and myth of Christianity.

I doubt it all happened like it’s laid out in the Bible.
Which is an after-the-fact retelling that has been
interpreted, reinterpreted and certainly
MISinterpreted.

Still, I like the idea that a good man, Jesus, brought
the world lessons of peace and love.
And when I attend Mass and hear the priest say
at transubstantiation:
Do this in memory of me
I am amazed that all these centuries later,
we are still doing things in memory of Jesus.

The peace and love part gets lost,
sometimes, in the mess that organized religion has become.
Like the hate aimed toward gays
or others who are different.
Or war, especially around The Holy Land.
Or the venal nature of some ministers.

Whether Jesus was God, man or both,
he taught us peace and love.

Wonder when we’ll learn that
lesson for real.