The air was still tonight as a new moon passed between the earth and the sun, leaving only a small, crescent-shaped sliver of eerie light over San Jose in a rare annular solar eclipse. Crescent shaped patterns covered our west-facing French door. 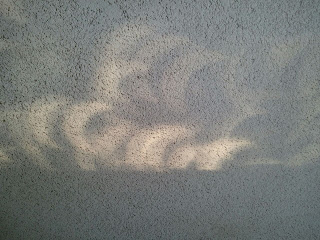 We made ourselves a pinhole camera so we could see the eclipse without going blind. An eclipse is a strange sight, indeed, and almost mystical. It’s easy to understand why early native people freaked out during an eclipse. Riley sensed that something was up: he was super-excitable during the two-hour solar eclipse.