“Support our troops.” Since the younger Bush sent troops over to the Middle each, we hear it all the time.  But what does it really mean?

It’s become almost meaningless, a self-righteous mantra that began around the time of our crazy entry into a war we got into under false pretenses.

Look, you’d have to be pretty cold to not send blessings to young men and women in military service. Young people who have chosen to risk their lives deserve a prayer. Even the most ardent of pacifists, like me, do that. No time to judge why they’re there, if they even know the truth about why they’re there or if they even should be there. You don’t have to support a war to bless them and ask that they be kept safe.

Even though I think this self-righteous mantra began as a subtle way to support this war. And I do wonder how many young people would have enlisted if they actually realized they were fighting for oil. Would they stand as proud if they really understood it? It’s a question worth asking by a people who have largely stopped asking questions.

And what kind, humane person wouldn’t send packages, letters and toiletries to our service people over there? As I’ve done many times. Many times. Including just last month.

How about the other thing we hear all the time:  “thank you for your service”?  What are we thanking them for, exactly?

When you dig a bit deeper, it’s obvious that most of these dedicated service people are not keeping us safe or protecting democracy. We were never at risk, not really.  Bush lied about Saddam’s involvement in September 11. Saddam had nothing to do with it. Yet still, today, people believe that we are at war to protect our country. That unethical Administration did such a great job of spinning that the fiction took root and is now part of our general belief system.

It shouldn’t be. It’s a lie. This war is about oil and even revenge and we shouldn’t forget it.

I’ve been in airports when troop planes emptied and I’ve seen the place erupt into applause, while I sat with tears in my eyes thinking of the truth of their situation.

I don’t see many of these on vehicles. Because first responders don’t have a political movement behind them spinning propaganda.

Are all these statements of support and thanks to military people assuaging our collective guilt for the horrible way we treated Vietnam veterans, men who had no choice because we had a draft back then? Maybe.

I have no gripe with sending well wishes to people who might one day be asked to protect us.  I just don’t think that’s what most of them are doing now. And I believe we should remember that.

My point is that we just don’t think things through any more. That we utter these slogans almost automatically, without considering their meaning. And we don’t apply them across the board. “Don’t burden us with the facts, we just want to feel good about something.”

Anyone who protects us, keeps us safe, should be thanked. And if it weren’t a political slogan, if it were a meaningful, thoughtful statement, they would be.

And before you get all hot under the collar about patriotism, let me quote one of our founding fathers, Thomas Jefferson: 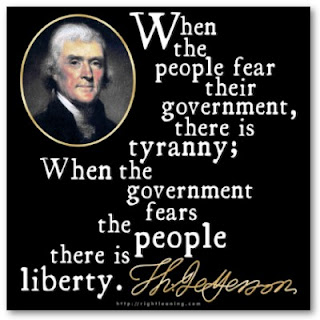 Some of us might need reminding that our founding fathers were radical protestors. And that under our democratic system we have not only a right but an obligation to ask the hard questions. To try to keep the system honest. That’s our role.

Even though there’s a whole political infrastructure out there that means to quash that kind of pure democracy. In the interests of “patriotism.”

Right. Jefferson’s rolling in his grave. In fact, he’s been spinning in it for some years now.

What bothers me about all the flag-waving, all the so-called patriotic chest-beating about our being the greatest nation in the world, is that it’s all hype.  That’s right. It’s hype that keeps us from looking at what’s wrong with our country–because REAL patriots admit that there’s stuff we need to fix–and without taking a long hard look at what needs fixing, nothing will ever GET fixed.

Because we’re not perfect, and that’s the damn truth. The other day I saw a speech on the new Sorkin TV drama, The Newsroom, that summed it up.

Here’s the dialogue, spoken by fictional anchor Will McAvoy, who’s on a panel addressing college students, and you should know in advance that I think this is the single most patriotic thing I’ve heard on TV in a very long time.

What makes America the greatest country in the world?
It isn’t.
It’s not the greatest country in the world. You know why people don’t like liberals? Because they lose. If liberals were so fucking smart how come they lose so goddamn always? And with a straight face you are going to tell students that America is so star- spangled awesome that we’re the only ones who have freedom? Canada has freedom, Japan has freedom, Germany. France. Australia. Belgium has freedom. So there are 207 sovereign states in the world and yeah, 180 of them have freedom
And you– yeah you, sorority girl—just in case you accidentally wander into a voting booth there are some things you should know,  and one of them is there is no evidence to support the statement that we’re the greatest country in the world.
We’re 7th in literacy 27th in math, 22nd in science, 49th in life expectancy, 178th in infant mortality, 3rd in median household income, number 4 in labor force, number 4 in exports.
We lead the world only three categories: number of incarcerated citizens per capita, number of adults who believe angels are real and defense spending,  where we spend more than the next 26 countries combined, 25 of whom are our allies. 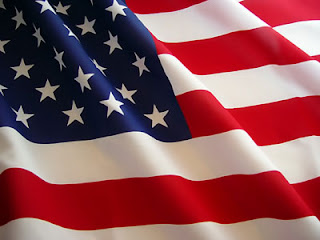 So, yeah. In my America, true patriots don’t beat their chests, or put 15 flags on their front lawn like one of my neighbors has done. They look honestly at America, its strength and its weaknesses, celebrate our strengths and admit our weaknesses and work had to shore them up.
That’s what this patriot thinks.