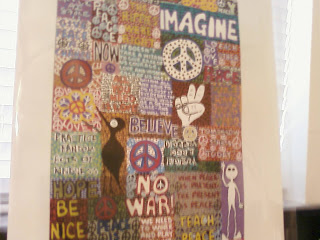 This is another piece I bought in Savannah. It’s a print that I love because it represents who I ended up being after college.

I came of age in the Vietnam era, and while I can’t claim that I was savvy enough to even have a position on war then, now I do. I am certain my pacifist position was influenced by the Age of Aquarius.

I often say I’d love to go back to the late 1960s and live them again any day, and I would. This print reminds me of the excitement of the times.

It was thrilling to be at the forefront of so much social change. The air was charged with change. You could just breathe it in. Everything was up in the air–societal institutions, long-held bigotries, the military-industrial complex–it was all shifting, changing shape, being torn down.

Sometimes, when I’m in the right frame of mind, and I see footage and music from that era, for an instant I’ll feel the frisson of excitement and can almost believe that I’m back in those times.

When I think about what’s gone on since, I wish I were.