"Plastic is good! Green is bad!" 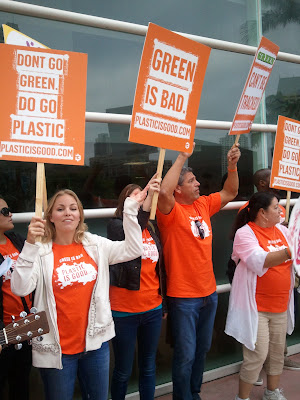 This provocative demonstration I saw at BlogHer ’11 had nothing to do with the environment.

The “plastic” is a card parents can load (monitor and control online) and give to their kids in lieu of cash (green). Get it: “Green (cash) is bad. Go plastic (card).”

Sounds perfect for parents to give kids going away to college. And to teens whose spending they want to control.

The demonstration was such a creative promotion (with such a huge potential to backfire) that I had to blog about it. Catchy little song and guitarist there too, by the way.

At first, folks walking by raised their eyebrows. But most people stopped to ask about it, providing an opportunity for that woman on the left to explain. This could have turned sour very easily, but everyone left smiling.

It was brazen to use slogans that had such negative connotations. But the execution was so good this ex-public relations executive calls it a win.

It’s always in the execution.

One comment on “"Plastic is good! Green is bad!"”