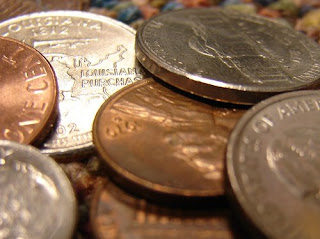 Thoughts are jingling around my head this morning like coins in a pocket. Or the bottom of my purse, to be more accurate. Sleep has been elusive this week… those jangling noises are so intrusive.

When I get out of bed in the morning, Riley jumps up and takes my place. I have to push him aside to get back in bed. If I’m lucky, his warm little body pushes up against mine as he goes back to doggie dreamland. That’s where he is now.

I love this little dog and I am so excited for him to have his own pack.

It’s 5am and I might not have power after 8am. The electric company hung a notice that they were doing maintenance that meant power might be off for parts of yesterday and today. Why do they do this in my block when the weather has become hotter and more humid?

I notice they made sure the door hanger notice had no contact information. It’s not like they want you to call or anything. The only saving grace is that huge TECO trucks are parked on the street. Easy to hunt them down.

Had power yesterday so today’s got to be the day. Of course it is, because I’ll be home most of the day and that means no A/C. I was out most of yesterday, which would’ve been much better. When the sun rises I’ll open the garage door and take the car out so I’m not stuck having to pull the emergency rope to get out.

Next week we’re heading to California, which always makes me happy. When I first moved to Los Gatos in 1984, living in the foothills of a mountain range felt so amazing. There was a little curve on Blossom Hill Road, over a small canyon (very small) and if I hit it just right I’d catch a glimpse of so many sparkly lights on the mountain that it looked like a fairyland and took my breath away. I can still imagine the feeling of wonder. 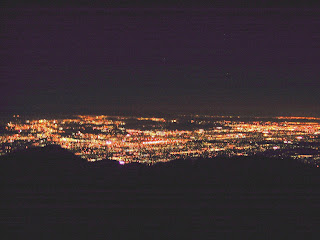 Of course, the population density in the daytime was far from fairyland, but to this flatlander girl, it was the most magical thing and I would always give a little gasp aloud at how beautiful it looked at night. I’ve tried to catch that same view again, but it’s vanished after years of develoment and foliage.

Still, I look forward to showing FLH some of the things I love.

My property manager in Pacific Grove thought he might have another live renter. This will be the third hopeful prospect we’ve had in the past few weeks. While I want it to rent, I also would like it to be available to show FLH so he can help make informed decisions.

But I’m not sure the Monterey peninsula is the right long term place for us. At this age, we have to think about what the long term might mean, and it seems a bit far from good medical care.

ME: That house has three sets of stairs, doesn’t it? (talking about the SF house FLH fell in love with online)

FLH: Yes, but look at the way the stairs are constructed. It would be easy enough to install one of those chair lifts, down the road. 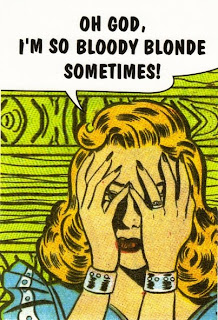 For the first time ever, I’ve gone back to a hairstylist and had her re-do my color. What a pain. She’s young, but I like her and I like the haircut. It’s just that she’s never gotten the color right, in more than a year. I suppose I should change, but it seems like even more trouble to find someone else. On the other hand, it’s not like I have 3 hours to sit in the chair repeatedly.

I thought I had the number for charming Karen, the stylist I used in Carmel. She moved to Santa Cruz and I actually drove an hour to her new shop, she was that good. The kind of person who doesn’t easily fit any category, I like her a lot. We kept in touch through her moves and mine, and talked as recently as last fall. But the number I saved to my cell phone SIM card for her is missing a digit. I may have to resort to People Search–a good stylist is hard to find.

Well, he’s never met a stranger and never been at a loss for words. He is a repository of random and not-so-random information that would put the Library of Congress to shame.

He’s already teaching me a lot about baseball, my favorite spectator sport. I’ve not been to near enough games and I look forward to rectifying that.

But I’m also learning more than I thought I’d ever want to know about credit default swaps.

He also has a command of Google Images that would put its founders to shame. I love getting his little illustrations to his emails.

And you’ve got to love a man who makes it clear that anyone who hurts you is on his shit list and will remain there forever. Or close to forever. Finally, someone with an Italian vendetta syndrome that works in my favor!

I could list more things, but he’s only now starting to get used to being the topic of writing. I am certain that our trips over the next month, and there are three of them, will give me ample opportunity to reveal the glories of His Nibs in anecdotal form.

So I’ll just say this. I sure do love this man. He sure does tickle me (that’s a Southern expression for “makes me laugh.”)

And I’m sure glad to have Love Redux back in my life. 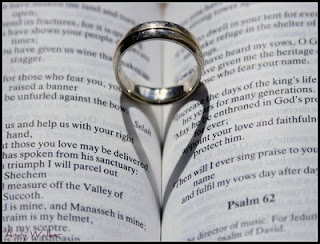 That 400-person, sit-down dinner wedding we had in 1972 was like a scene out of The Godfather. In many ways. We had a bridal party of 20. No joke. One of the groomsmen had so much to drink he slid down a “Gone with the Wind” type staircase on his nose. My mother was pissed that the ice cream was melting before it was served so she visited the dessert trays and dumped each bowl upside down so it couldn’t be served. My sister came down with the mumps and puked up wine in the bathroom. It was one of those weddings that was probably more fun to attend than to star in.

We’re getting married on our anniversary this summer and in a romantically nostalgic way. When FLH was in law school, we hung with a crowd that included a couple that met and married that first year. He was FLH’s closest pal. She had a baby while attending law school. They now live in Tampa and I ran into them when I first moved to Tampa and we re-established contact. He’s in private practice. She’s a judge. FLH hasn’t seen them in years.

I was out to dinner last week with her and another woman who was in our Tallahassee crowd back then. I can hardly believe it was 37 years ago, but it was.

Anyway, FLH cooked up a fun “reveal”. It’s important to know that both women are connected in legal circles, as the other is a longtime paralegal. Both salt of the earth people. Really fine human beings.

We did a few minutes of catching up early in the dinner. I was wearing the bling, but these are the kind of women who actually look at your face when they converse, and so they didn’t notice, and I kept my hand hidden in my lap. Finally, they asked “So tell us about your fiance!”

I pulled out his business cards and handed one to each woman. “I don’t know–do you?”

The judge looked at the card, looked at me and said. “No.”

“NOOO!” she responded, and as cognition caught, her eyes filled with tears. “This is so right!” she said.

I told an abbreviated version of our story and she cried through the whole thing. We all reminisced about those days, talking of people we knew, enjoying anecdotes about the old days. And every so often, the judge’s eyes would tear up.

Of everyone we’ve told, she really got it. Her path was different: a long-term marriage and four kids. And I know she sensed the impact of our divorce. Because she’s one of the few we know now, who knew us back then. When we were all young and innocent. Our lives lay ahead, an open road. And here we are now, in the second half our our journey.

We called FLH from the restaurant and her opening comment was: “I have only one thing to say–” and she SCREAMED aloud. The entire restaurant came to a standstill. It was like the old EF Hutton commercial.

As a judge, she can officiate at weddings. She offered that she’d like to do that, and FLH and I agreed.

So on what would’ve been our 37th wedding anniversary, we’ll go to her chambers and she will marry us. Quietly. Meaningfully.

Just us. The judge. And her husband, of course.