Is it money? Or is it manners?

Sex is no longer taboo, not when we can read in any newspaper about 12-year-olds having oral sex. Or crazy farmers having relations with their livestock.

No, sex has fallen off the taboo meter.

People talk about the sex in The Wolf of Wall Street but that movie’s not about sex. It’s about money.

We’re not supposed to talk about money.

It’s a taboo subject, which means I want to talk about it today.

I’ve blogged a bit about this before, but this time, I’m taking it further.

Let me set the stage in case you don’t remember.  I had a very long career during which I made my own way up the ladder and supported myself during a long single life. After divorce I never took or even asked for anything, just what I came in with.

I worked hard and I did ok.  I wasn’t rich, not by any means, but I did have a good salary and managed to save, invest and earn a little bit of security for the future.

I’ve known him since he was 20 years old. We were married when he went to law school and during the early years of his legal career.  We lived in the sh ithole that was called “married students housing” during school and afterwards had begun to improve our standard of living –and then we were divorced.

He worked hard and did well in the ensuing years. By the time we remarried, some 26 years after our divorce, he’d established financial security, which, when added to mine, meant we both had a comfortable retirement coming.

We live a happy life. Not an extravagant one, unless you count our travel. Which we like to do as much as possible.  But other than that we live pretty modestly. No mansion, no luxury cars, we eat home most nights, go to discount movies, all the usual things. Most of my friends have much better jewelry collections , bigger homes and more expensive clothes and cars. They cocktail and eat out more often than we do.

Oh, I do have one killer engagement ring.

“Hmm, why didn’t I get alimony?” I asked him, joking around one day.

“You’re getting it now,” he said, looking at my ring.

I deserve that ring, by the way. It’s symbolic.  I mean, he did leave me once.

Anyway, back to money.

It’s been surprising–no–shocking is a better word–how many people feel that they have to comment on our financial status. On their perception of it.

Not exactly snarky comments, but comments nonetheless.  For some reason, our financial situation lurks in the background to be pulled out from time to time. It always blindsides me.

Some of these people have their own financial security.

Others could have, had they made some of the decisions that we did.

A few have stable and generous pensions. And much bigger and fancier houses.

None of them are poor or even close to it. Some have significant six-figure incomes.

But for some reason they simply have to comment on our finances in some way.  Some even assume that my husband or I should pay for…whatever.

“You can afford it.”

It rubs me the wrong way. In a big way.

Because they usually can afford it just as much as we can.

I don’t get it. There were many years –DECADES, even–when I was friends with people who had big money. I never once had an expectation or made a crack about their means.

Maybe the people who make these comments have forgotten their manners. How does what we have or don’t have enter into anything?

It’s offensive to make assumptions about people and it’s not polite to comment about their means–either their lack of means or your perception that they have means.

I have two words for these people: 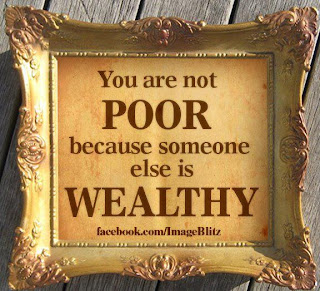