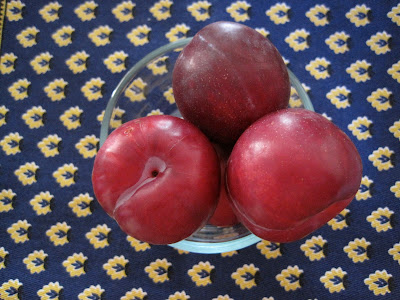 We’re in the waning days of summer, and like all good things, plum season will soon come to an end. If you’re wondering what to do with those later season plums on your tree or in your CSA box, here’s a tasty, simple recipe that’s healthy and nice enough for a company meal:

I found it this morning in my latest issue of Martha Stewart Living magazine. It looked so good, I had to make it tonight. And, like most things out of Martha’s kitchen, the dish was as good as it looked.

Here’s the recipe — so easy to prepare it’s ridiculous. 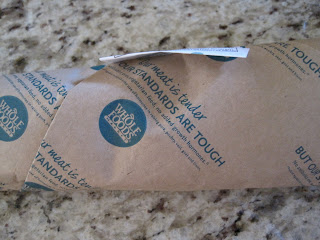 I started with a pound of pork tenderloin from Whole Foods. Yes, Whole Foods IS more expensive, but the quality of meat is unsurpassed. The slogan on their butcher paper OUR STANDARDS ARE TOUGH  isn’t just a slogan.

And like I’ve said before, I only buy meat from top-rated butchers now, because we’re very concerned about what we get at the regular grocery store. I’ve actually returned meat to Safeway’s butchers.

We got about a dozen plums and plouts in our CSA box Wednesday night, so the plums I needed were already on hand. This recipe called for four plums.

Oh, and the dish serves four, by the way.

And while I usually have red onions on hand, which this recipe calls for,  today I had only a yellow onion, so I used it. My onion was gigantic, so I only used half.

That’s all I needed. Let’s summarize: 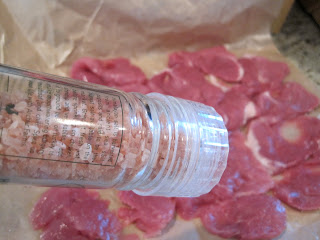 1. My sous chef, M., sliced the pork into thin slices and I pounded them into thinner ones, then salted with some pink Himalayan salt. Any coarse salt will do the trick.

I don’t really cook with much salt, which would horrify professional chefs. But it’s not that good for us, so I usually leave it out.

Not this time, though. 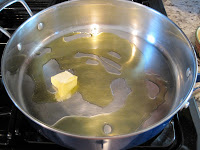 2. Put the olive oil and some unsalted butter in a pan and brown the pork. I used a very large frying pan. 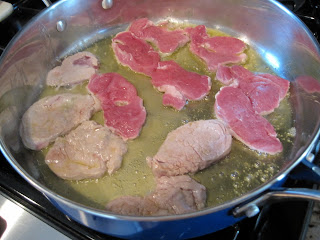 3. My mother was super-paranoid about trichinosis from uncooked pork, so, channeling my mother’s spirit, I completely cooked the pork slices, then removed them from the pan.

It took just a couple of minutes, because I’d pounded them so thin.

4. M. sliced the onion, then cut the four plums into wedges and sliced them yet again so each was about 1/8 of a plum. 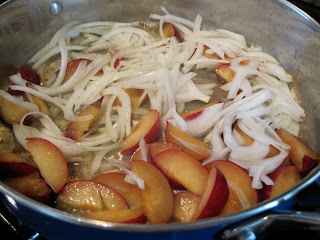 5. I threw it all into the pan, which was still coated with olive oil and butter.

6. I like my onions on the soft side, so sauteed them a bit and then poured in the 1/4 cup of red wine vinegar, stirring until bubbly.

7. I added the pork to the pan and heated it all up together.

It was delicious.  The sweet plums cooked nicely in the vinegar, adding a little bite to the pork. If you wanted a sweeter dish,  you could omit the vinegar and add a little brown sugar. That sounds good, too.

We still had an ear of sweet, delicious corn left from our last CSA box, so I boiled it up. A beautiful Acme sweet batard called my name at Whole Foods, so we had a couple of slices of that. And a nice salad rounded out the meal.

That’s it. Awfully easy and a great main dish use for summer plums.