Prickly pear for skin care: you heard it here first 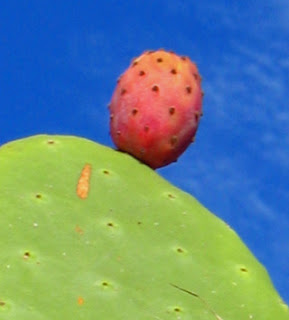 I remember my grandmother telling me that prickly pears were a delicacy in her native Sicily and how she loved to eat them. She lived to the age of 99 and her skin was beautiful until the day she died.  Now I’m wondering if those pears had something to do with it.

Prickly pear oil is becoming all the rage as a powerful skin care elixir in Europe, Morocco and the Middle East. Since it comes from a cactus native to southern Morocco, we saw a fair bit of cactus being farmed as we drove through the countryside.

Touted as a strong antioxidant, its high percentage of essential fatty acids, Vitamin E and linoleic acid, plus its quick-absorbing properties are making it a popular ingredient in high-end skin creams.

It takes 10,000 prickly pear seeds to make just a single litre of the oil, so lots and lots of cactus are needed.

And just like with Morocco’s argan oil, high-end cosmetic companies — always on the lookout for something new– are starting to pick up on prickly pear oil.