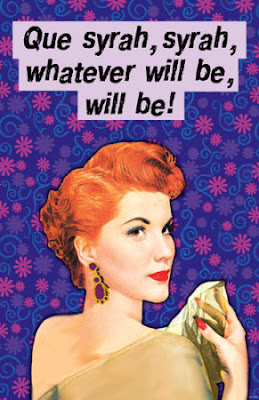 I’m not really a fan of syrah, are you?
But I read a legend about it:
It was brought from Syracusa
by the legions of Roman emperor Probus
after 280 A.D.
But historians say it’s a lie.
That it really originated in the Rhone region of France.
That’s probably more than you wanted to know, right?

Wine production goes back to 6,000 BC
in the country of Georgia
(dated by relics of a wine press and fermentation jars)
and the oldest known winery was in Armenia.

We Californians sometimes act as if
we invented wine, but it’s got a long
and interesting history.

Napa’s got an interesting history as well.
James Conaway’s book, Napa, is
a great introduction to the intrigue, scandal
and history of wine in this area,
which goes back only 40 years.

And if you want to tour the California wine country,
I’d suggest Sonoma over Napa any day.
It’s far less pretentious
and less crowded.
Dry Creek Valley, Alexander Valley–
worth a look on any wine tour.