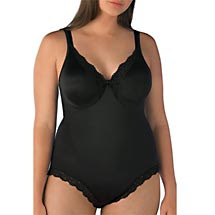 You really can’t be around mid-life women much without the concept of “self-esteem” coming up. Men have the same issues, but they don’t really talk about them.

For men, self-esteem is usually tied to their professional image, but for women, it’s almost completely tied to their appearance and how they think they will appear to men.

If you’re wondering why there are so many shiny-faced, duck-billed, large-and-perky-breasted women around, wonder no more.

Women take the images they see in the mass media very seriously. Stick-thin models, big-eyed waifs with smooth skin, large breasts and certainly no wrinkles–this is the ideal that women feel compelled to live up to, for whatever the reason. Men can have anorexia but it’s much more prevalent in women, and especially young women.

It’s a sad state of affairs.

There’s been some recognition of this among the media and advertising professionals, but even Dove’s much-vaunted “big girls” campaign on “real beauty” retouched photos of the plus-sized models.

And the fact is, men are very visual. So women have at least some reason to pay attention.

One of the great things about the TV show Mad Men is that the sexy vixen of the show is quite voluptuous, in that 1950s-Varga girl-hourglass-figure kind of way. And there’s no doubt at all that she’s sexy, by anyone’s standards.

I have a visceral understanding of this subject, because I’ve always been what society today calls a big girl. My “normal” size is 12, I’m best at 10 and models that size are considered “plus”. Which is ludicrous. It’s easy to swing 20 or more lbs either way, depending on how much exercise I’m getting and nutrition. (That’s what my trainer calls food. We never talk “diet.” We talk “nutrition.” Or “eating clean.”)

Body image in women is completely tied to self-esteem. But women would be surprised (if not shocked) at the number of very fit men who prefer a woman with a more womanly body. In my single days, I went out with a personal trainer (not mine). I dated one of those southern California gladiator-stunt men. An East Bay cop. A Hollywood creative executive.

I still don’t get why men like fake breasts. And apparently, judging by Hollywood hype, men like the bigger bootie. The pear shape. Apparently it’s an evolution thing, having to do with easy childbearing, etc. Bootie padding is on the market.

So it’s not as simple as it seems.

Look, no question that it’s better to be fit than not. And I do feel better when I’m working out all the time. And look better. But the degree to which self-esteem is tied to body image in women is not healthy.

This is one of the reasons my partner and I are planning to offer a workshop on self-esteem for big girls. It’s got a great name, too. But I’ll save it till we unveil the website. I think it’s going to be our best offering.

And yes, that’s why you saw so many Varga girls on the blog last month. As Queen Latifah says, “I’m working it, girl!” We’re putting a lot of thought into these workshops. As you can tell.