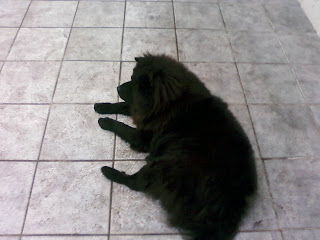 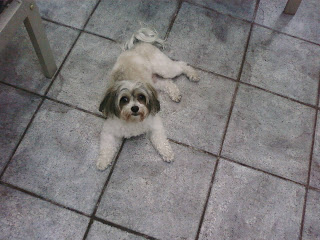 Puddin’ is an imposing sight, with her big paws and bigger hair. She’s only 42 lbs, but she looks alternately like a bear and a lion.

She’s a pure-bred mahogany chow-chow (that’s black with red highlights), about six years old, and a little crippled by bone spurs. That’s because she was rescued, from a place where she was tied up and forcibly bred. And injured. Hence the bone spurs.

Now, chows were originally bred to guard the Emperor of China. To be fierce.

Puddin’ is the sweetest girl you’d ever want to meet. Tail-wagging, smiling (oh yes, smiling!), sweet. She is submissive to Riley, which is quite a sight. But if he threatens her food or water, her low, guttural growl is definitely a warning he respects.

It’s almost 24 hours and the two of them have reached a preliminary accord. Although spoiled little Riley doesn’t like it when she gets attention.

Here’s the two of them on the patio this morning, while we had our coffee. (In the horrible summer-in-Florida humidity.)