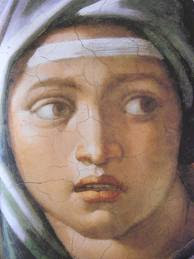 She’s been in the Sistine Chapel for hundreds of years. How many papal conclaves has she looked down on? How many tourists have noticed her, just one of many painted figures in the intricate Sistine Chapel?  She looks apprehensive, uncertain. 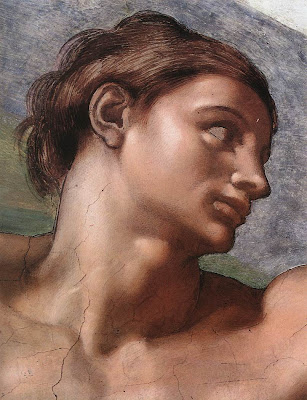 He’s beautiful, and yet, he’s got a bit of a jaundiced eye, at least figuratively speaking. The Apostolic Palace, in which the chapel resides, is ancient, but the first frescoes were completed in 1482. This guy’s seen a lot. Who can blame him for giving the world a fish eye? 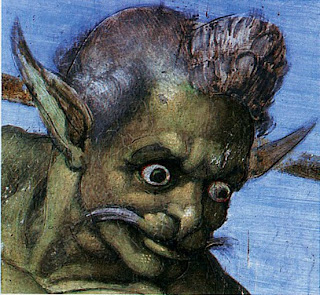 There’s always a fly in the ointment, isn’t there? The underworld is represented even in the most Catholic of places. After all, what’s the Renaissance without some darkness? 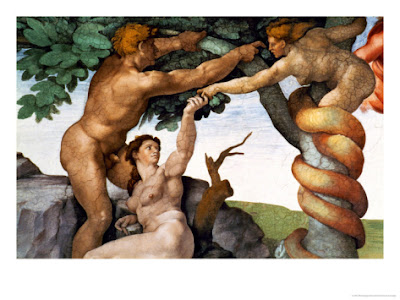 They’re always rushing us out of the chapel. Wouldn’t it be wonderful to be able to appreciat the gorgeous frescoes at leisure? The intricate way muscle and flesh are rendered?

I had an amazing month in Rome, about half a dozen years ago. 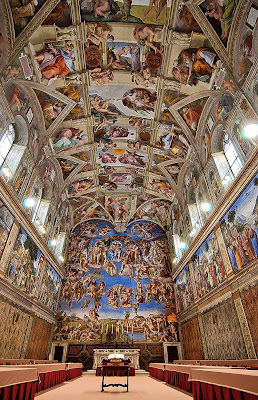 It would take an awfully long time. We were standing toward the back of the Sistine Chapel, behind where this photographer  must have stood. A Vatican functionary opened hidden doors to go into the Apostolic Palace and, in that way Italians have of giving us an expected treat, left the door open for just a little bit so we could catch a glimpse of a room not open to the public. I remember the intricacy of the design and beautiful carved cherubs gazing down from pillars. It was just one of the things that made that visit special.

All this TV coverage of Rome has made me long for it. Real cappucini.  Nuns and priests crossing streets, their robes flapping in the breeze. Fountains in the squares. Ancient architecture on every corner. Beautiful nights.