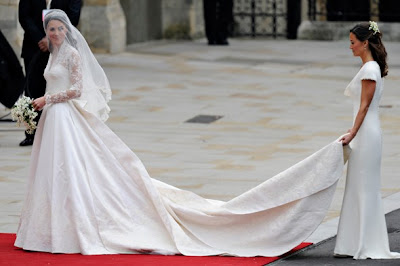 If you’re just waking up, here are a few odds and ends from the last few hours. {I got two hours of sleep before midnight, and that’s it. However, my BFF from Florida called at 1:30 am and we spent two hours watching together via phone.}

Prince William cracked a joke to his future father-in-law at the altar, telling him: “We were supposed to have just a small family affair.” I like him even more for this.

Catherine looks beautiful. Her brother gave a reading and did a fantastic job.

The couple wrote their own prayer for the service.

BBC has been tweeting madly all “morning” (in the UK). So has Clarence House. My, how times have changed.

The young couple will be known as the Duke and Duchess of Cambridge.

The astronauts on the International Space Station sent best wishes from space on film. So cool.

The horses to be used today were exercised at 6:30am. The stable was very busy afterward, getting them groomed and prepared for the day. Behind-the-scenes stuff you never think about.

Royal wedding used to be about power: mergers and acquisitions. Not now.

Westminster Abbey doors opened at 8:30a.m. to be sure there’s time for all 1,900 guests to be sated for the 11 a.m. wedding. It was first-come, first-served seating except for a small number of special guests.

The Abbey looks beautiful. The maple trees serving as wedding decor in the Abbey will be planted later at Highbridge, a lovely memento.

The Archbishop is straight out of Central Casting.

10,000 foreign media reps are in London with makeshift TV studios all over the place near Buckingham Palace.

The Queen is the only one who does not sing “God Save the Queen.” Even Prince Philip sang.

Ah, finally married. Such beautiful smiles. The bride looks like a queen already. And now, more trumpet fanfare and the processional. I loved the warm smile Prince Philip gave Catherine as she curtseyed to the Queen.

And now, the carriage ride. Just beautiful. No one — NO ONE– does pomp and circumstance as well as the Brits.