Camping. Just not my thing, you know? But the brochure made it look so romantic and luxurious, well, it seemed like a good idea. At the time. A camel ride and then a night in a luxury tent in the Sahara. So off we went, the five of us, rocking and rolling over the dunes in two 4x4s. Yes, crossing the Sahara. Bumpy ride, though. 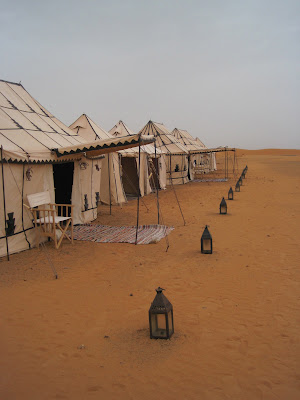 What a surprise to find such a lovely encampment in the Sahara! And all ours. 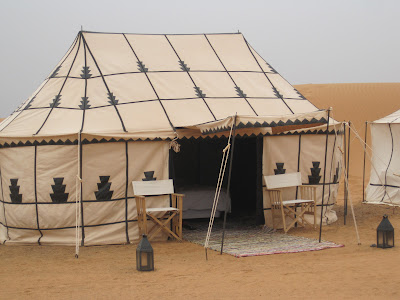 Our tent. Yes, that’s a double bed in there, with crisp white linens and gorgeous Berber rugs on the sand. Sounds neat, right? LED lanterns and flashlights. No kidding. 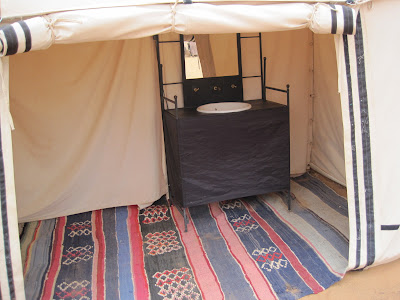 Our private bath in the middle of the Sahara. Right next to our tent. Chemical toilet, too. And a SHOWER. 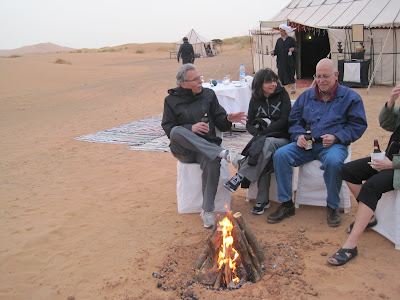 We needed that fire; it was quite cold in the Sahara and only got colder as the sun set, which it’s doing now, although you can’t tell from this photo. That’s my husband in the center. He’s probably cracked wise, as usual, so everyone’s laughing. I’ve been trying to talk him into a long robe and turban and a little Ali Baba fantasy, but he’s not buying’. 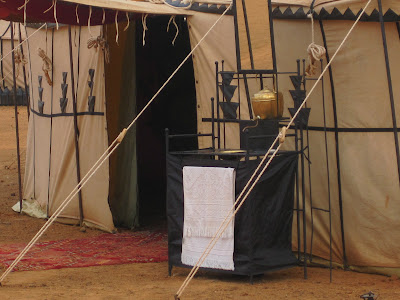 This lovely little sink with copper water container and faucet was just outside the dining tent. 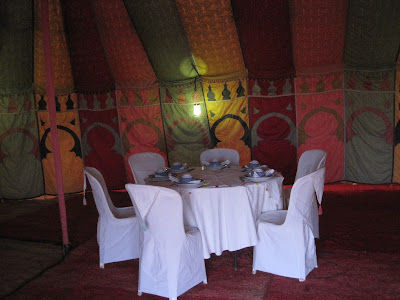 Yes. This is our dining tent. Not kidding. In the middle of the Sahara. China and regular utensils. We had a delicious tagine, couscous and the works. Alas, though, an overcast night and we couldn’t survey the stars after dinner. Nothing to do but go to bed. 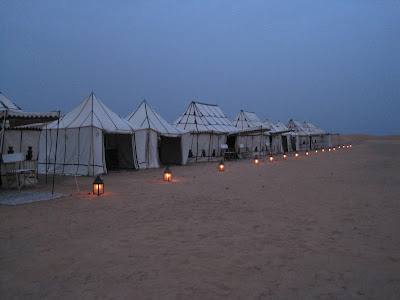 So picturesque, no? We were in bed by at least 9:30 and off to dreamland shortly thereafter, warm and cozy under a thick comforter.. At 2a.m., though, we awakened to a driving rainstorm. M’s pillow was up against the tent wall and in the morning, was nearly soaked through. The sand turned to mud. Showering in the freezing cold did not sound very good. Only one of us chose to do it.

What did sound good was having coffee, breakfast and getting out of there just as soon as possible. Which we did.
And God, didn’t a hot shower that night at a 5-star hotel feel good.