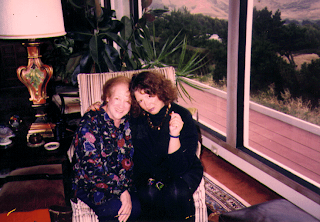 IN
MEMORY
WITH
GRATITUDE

The number rings into a void, into the ether, into a tangle of central telephone office wires leading nowhere. Sprawled on top of a hill, the best house in a tract of split levels sits empty; a long, red brick ranch awaiting a new owner, a new family, a daughter who will one day grow up, move away and dial home, knowing there is no one there.

Away from home for the first time, an uncertain college freshman, I dialed my mother for an anchor, to feel the drag of family and know that there was a place I belonged. I had longed to go away to school, anxious to escape the strict confines of an old-fashioned Italian family. As my father maneuvered his Oldsmobile 98 through the gates of Syracuse University I was no longer so brave.

“I’m not sure I want to do this,” I said to my parents, as I huddled against my shiny new blue American Tourister suitcase in the back seat.

“It’s too late now,” my father said, lightly, not even glancing in the rear view mirror. My mother, for once, was silent. I was the oldest, the first to leave home.

It was 1969 and between rolling joints, stringing love beads and ripping rags into armbands that displayed the peace symbol in redolent black Magic Marker, I made my calls collect, dialing 0 for operator and for sustenance. The phone rang in our family room 90 miles away where my father had the television cranked up so loud my mother could hardly hear me.

I met my first husband that year. He was a graduating senior, Italian and from my home town, no less, and two years later I left college to get married. His law school was 1300 miles away and I was only 21. As we drove off into our new life, I sobbed as if my heart would break as I waved goodbye to my mother and grandmother who stood in the driveway waving, Kleenexes in hand.

When we got to Tallahassee I dialed home to find out how to make my mother’s meatballs, to check if buying retread tires was ok and I dialed during Lawrence Welk to hear my father’s irritated “hello” through the champagne music and to hear my mother tell me to “hang on” while she took the call in another room. I loved my father but it was my mother who was my support and my lifeline.

Nine years later I was devastated when my husband left me, and I dialed to hear my mother’s sympathy and my father’s anger at my soon-to-be ex-husband and, too soon, I dialed to tell them I was getting married again and over the telephone wires that connected us I heard my mother’s tears.

I dialed home, embarrassed, a few years later, to say I had left this new husband and was moving to California on a great adventure. When I got to California, alone, knowing no one , without a job, Christmas just two weeks away, I dialed collect every day for survival, to hear my mother’s familiar voice, raspy from the cigarettes she was not supposed to be smoking and over the 3,000 miles I dialed to know that I belonged.

Over the next decade and a half I dialed 288-3095 every few days. I dialed to hear my mother’s judgments, for arguments, to gossip and to bitch; but I dialed mostly for unconditional love.

I moved back to Florida, and one March afternoon, on the spur of the moment, I decided to marry my current husband in the conference room of the company I worked for. I dialed and pushed the speakerphone button so my parents could hear the notary pronounce us husband and wife. I had no way of knowing that in 18 months my mother would be gone.

After two months in ICU, comatose, near death, she was home from the hospital and if she wasn’t completely perky, it looked like she had miraculously sprung back. Driving down Bayshore Boulevard every day after work I’d call on my cellphone to hear her voice, to know she was there again after so many weeks of silence. I called for a lifeline, to connect my life to hers and in the process to keep her alive.

“Why are you calling me so much?” she asked me. “You’re scaring me. Is there something wrong with me you’re not telling me?”

I was sleeping in her bed at my childhood home six months later when the phone jarred me out of a restless sleep. “She’s gone,” my sister told me. Together, we drove to the hospital to say goodbye.

It was the day of my father’s long-awaited neuropsychiatric evaluation for the memory problems we’d been ignoring during my mother’s illness. We kept the appointment. Four hours after saying goodbye to our mother a doctor told us our father had Alzheimer’s disease.

Months after my mother’s funeral and after we moved my father into a very nice lock-down facility I flew in twice to help clear our family home of its 50-year accumulation and prepare it for sale. When the house was finally empty I looked around one last time and drank in every detail, before setting the alarm and shutting the door.

Back in California I often felt the urge to dial 288-3095. I always stopped short of picking up the phone. I pictured the bell ringing in an empty house and then I wondered if my sister had asked the phone company to disconnect it yet. The impulse to call was strong when my favorite cat died, when I got approached about a new job and was stronger still when my sister announced she would marry for the first time. Still, I never actually went to the phone.

A very nice family bought the house two months ago. My sister says there were pumpkins out at Halloween and that she thinks they have children. I pictured them gathered in the knotty pine kitchen for dinner in the early darkness of an upstate New York winter. I thought about the way the snow covered the house during a big blizzard and how exciting it was for us as kids. I thought about sledding down the big hill in back and about my father’s vegetable garden. I thought about the mother standing in front of the sink like my mother did and about her one day picking up the phone on the white formica kitchen desk to talk to her daughter who is away at school.

I picked up my phone and dialed.