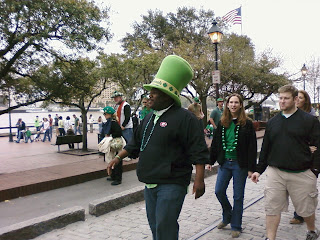 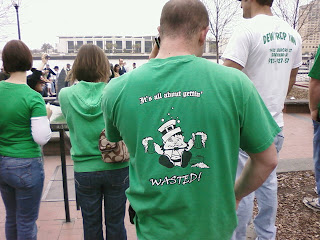 St. Patrick’s Day partiers are here and it is a sight to behold. By the way, that t-shirt says “It’s all about getting wasted,” and from what I can see, it’s correct.

More about our B&B later, but let me just say that it was the model for Disney’s Haunted House. True. It’s supposed to be haunted. Hopefully, I won’t wake up in the middle of the night to find some Rebel soldier sitting on the chair near my bedside, because, truly, I would have a coronary.

This evening, we had a uniquely Savannah experience. A true “Midnight in the Garden of Good and Evil” moment. We walked into a coffee cafe about 8:15pm for a light supper, because we heard an electric guitar playing Smokey Robinson’s My Girl. We could hear the guitar player talking to other patrons. He sounded about our age and the music was from our era.

We ordered our sandwiches and settled into some plush armchairs, looked up at the guitar player. Although the voice was decidedly masculine and so were the features, the guitar player’s blonde hair was attractively bobbed, with bangs, and on display was at least a B-cup set of breasts. Our guitar player was a transsexual. A very nice guy/gal. I say that with a little confusion, because the voice was so masculine and s/he sat with his/her khaki-clad legs spread like a guy. No package on display so either she was a good post-op OR she’d bound her privates very well.

I know a little bit about this world, more than a little, actually, from the coronations I attended in the San Francisco Bay area. And so really, it was no big deal. Until the next song in rotation. The Beatles Yesterday.

And when s/he got to “I’m not half the man I used to be,” well, we tried really hard not to lose it.

We looked at one another and really, it took me two songs to recover.

It wasn’t midnight, but we were truly in the garden.

1 Pings/Trackbacks for "Savannah: It’s ON!"