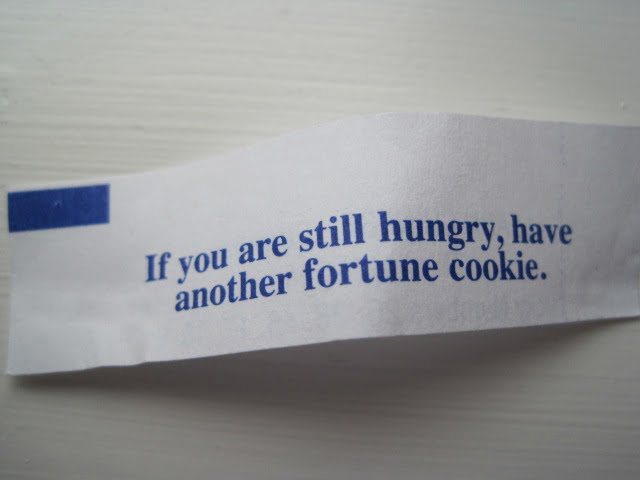 The most useful cookie fortune ever. Yes, I got this a few weeks ago.

This is the second part of a series on … well, what IS it on?

Can the future really be predicted? Can some people actually talk to the dead?  In yesterday’s post I talked about my experience with psychics and mediums. I’m continuing the discussion today.

One sunny afternoon last summer, my husband and I were strolling around a northern California beach town and saw a sign for psychic readings. I decided to go in for a 15-minute reading.

“Two things are vying for your attention,” said the reader. “You think you’ll be fulfilled by both, but really, only one of them is your destiny. The Universe will guide you, pay attention to the signs.”

It was true. I’d been involved in two major activities and I loved them both. They weren’t coexisting well, though, because one was super-time consuming. It had also turned super-bad super-fast.

That morning I’d said to my husband, “Do you think it’s too late to pull out of (Activity 1)? Would it be unethical? I really don’t want to do it.”

“It would be unethical,” he said. “You’ve already committed to it and it’s too late to back out.” I knew he was right, but I really wanted to back out. So we went to the beach, had a nice lunch and I had a card reading.

That afternoon, the phone rang. I was given the opportunity to back out of Activity 1 with no harm and no foul. I took it.

My husband shook his head. “Ok, this is probably beyond coincidence.”

Probably??? I laughed. The Universe had spoken. And had told me it would speak. But then again, these things happen to me all of the time. I think they happen to everyone, but not everyone pays attention. We call it “serendipity” or “happenstance.” I’ve had so many of these “flukes” or coincidences that it really did shift my husband closer to my beliefs than I thought was possible.

Almost two years ago I had a session with a medium. In the session a woman came forward. She said she was one of my guides and her purpose was “healer.” She told me that during a time of great grief she sat with me every night and combed “tiny little thorns of grief” out of my hair. I remember that time of grief well. The imagery was beautiful.

My healer told me that she had no reason to make herself known to me until then and she was coming forward to tell me that I was going to suffer an injury in the future. That it would feel like it was never going to go away, but that it WOULD go away. She felt I needed that information, probably because she knows I am neurotic. (It doesn’t take a psychic to know that!)

Three months ago, I suffered just such an injury. It’s stuck with me a very long time. Could this be what she foretold? I believe it is.

Of course, this could be a coincidence. I just don’t think it is.

This hangs in my office.

It took me a long time to understand what “faith” is and to have it. Even though I was raised a Roman Catholic, I never believed any of it and never understood how others did. Now, though, I have a better understanding of faith.

“Fundamentalist Christians are just as convinced of their path as you are of yours,” my husband said once. I get that. I also get that there are many paths to the Divine.

I don’t need or even expect other people to believe as I do, although it turns out that many do. I can only tell my experience. What others do with it is up to them.

Have you had an experience with psychics or mediums? Things in your life that aren’t easily explained by chance? Or do you think it’s all hogwash? I’d like to know.

I am in Portland, OR at the Fourth Annual Afterlife Conference. I’ll blog about my experiences when I return.