The unexpected death of a loved one can shake you to the core.

Oh, of course, I should have expected it. She was, after all, undergoing treatment for two different cancers and had been for almost six years. She’d been hospitalized more than a couple times with countless other long visits for blood and platelet infusions. But when the end of her life on earth came it was without warning. Quickly, silently and, we’re told, painlessly.

“Brain bleed,” her daughter’s voice told me on the phone that morning.

I clutched the phone more tightly.

Shaken is the word.

Stirred is what we all were, her dear girlfriends, as she fought that long battle. Yet another valiant cancer warrior. Only it was our beloved friend. We rallied around her as if our combined effort could keep her with us and maybe it did. The girlfriend who kept her company several nights a week. The one who brought her salmon from the farmer’s market every Saturday. The ones she went to early dinner with when she felt up to it. And me, the one who would zoom over to any hospital she was in to encourage her, make her laugh and hear her concerns. We were stirred, alright.  We all knew the end game.  We just weren’t expecting it that day or that week. Or even that year. Last year. About six weeks ago.

Shaken is the word.

She had had a beautiful birthday the week before. Family and close friends gathered at her home. She looked beautiful. And happy.  I had offered to have my husband bake her cake, something he often did when she needed to gain strength.  She said she wanted dark chocolate with dark chocolate frosting.

“Can you get fancy?” she asked with a naughty grin.

“How fancy?” I said, in that tone of voice that always made her laugh. The same one I’d use when I said “what, me vacuum?”  I needed clarification. “Do you mean rosettes-on-top fancy?”

“I’d like vanilla creme and bananas between the layers and the top to be covered with walnuts.”

At home, my husband quickly Googled “how to make vanilla creme.”  We bought the ingredients and he baked a cake that everyone raved about, including her.

A few days after her party, she made sure to tell me again how delicious it was and how she was still eating the leftovers.

“Michael could open a bakery,” she said. “If you ever have to bring a dish to someone’s house, that’s what you should bring.”

In those last days, she gave me instructions for the rest of my life. I didn’t recognize them as such at the time, but now, in retrospect, I know they were. She knew I was pursuing a particular goal and she’d had a dream about me that gave her an opening to exhort me to continue. The dream was extremely detailed, down to what I was wearing. She told me what she wanted me to do. In those words.  “I want you to…”

I said I would.

Only days later we gathered around her hospital bed as the priest anointed her in the last rites. Together, holding hands and touching her, we recited The Lord’s Prayer with him in the ancient ritual that Christians had done for centuries.  She was “brain dead” they’d told us, a ventilator mechanically pumping air into her chest while we waited for one of her kids to get back to town. She’d had a catastrophic bleed and was gone. And yet, during the prayer, she moved her head, twice. And a few minutes later, another time. Although one of us had been with her every minute since her bleed, she’d not moved before then and she didn’t after, even when they removed the ventilator tubes. Except for when her daughter arrived and spoke to her and held her hand. She moved then.

So, brain dead? Obviously consciousness does not reside in the brain and it does survive physical death. As much that idea scares us a bit.

“I have no good explanation for that,” her doctor (and mine, too) told me.

A few minutes ago, while I was writing this, a wicker basket on the shelf above my computer fell off the shelf and into my lap. For no reason.

The day she died, on the way to the hospital, a candle app on my phone lit of its own accord. Michael was driving and I looked down on my phone and there was a lit candle.

“What a coincidence!” I said to him.

In the hospital, it happened again. And then once again.

It isn’t even on the same screen as any app I regularly  use. It’s a few clicks away.

There are no coincidences.

I think of her beautiful hands, those long fingers and soft skin unmarked by age spots. I could almost see her mischievous grin as she pushed the basket off the shelf and lit the candles to get my attention.

The day after she died, a close friend of mine who had often sent her Reiki, called me.

“At about 2am I woke up,” she said, “and felt a cool breeze float by my face. That’s always my indication that a spirit is present. And then I heard, clear as a bell, this:  Tell Carol I’m free.” 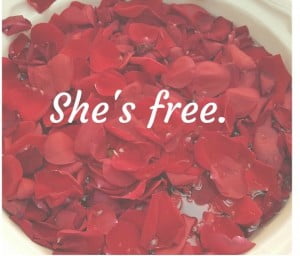 And then, a week after her death, I received a text from her phone. At the time it was sent, no one had been near her phone. In fact, it was in her home and no one else was in the house or had been, for hours. We thought perhaps it had been sent earlier and delayed after sending, but when her phone was checked, the sent date and time were a week after her death. Of everything that has happened, THAT was the one that freaked me out most. We looked for a rational explanation and found none, because the text wasn’t delayed in the system after sending, it was sent after her death. It wasn’t “scheduled” because she had absolutely no idea how to schedule a text.

The text read, “Tell Riley we are on our way.”  She did come over to see Riley about a week before she died and it wasn’t unusual for her to write a text and forget to send it. Which is what I suspect she did with that one.

But other texts were sent from her phone after she wrote that, so it didn’t just go off when she touched her text screen. Other people had handled her phone in the days since she left us and it hadn’t sent then. And her daughter even texted me a phone number from her mother’s phone a few days after she died. This particular text didn’t send then, either.

This text? It was sent days later and just hours after I’d been at her interment. There, I told her to come visit, as I did several times at the hospital and again at her wake. Apparently, she did..

I’m pretty sure she’s watching this unfold from the afterlife and laughing at my struggle to accept her contact.

There are things we can’t explain, at least not yet. She and I had talked about these things over the years and we’d talked about the afterlife not too long ago. I told her what I thought happened after death.

Now she knows, too, and is telling me she’s there and I was right.

I’m thinking that I’ll continue to hear from her in big ways and small.

In fact, I’m counting on it.

My very favorite photo of my friend and one of her grandchildren, taken about a dozen years ago.

67 comments on “Shaken, not stirred”