The Pretty Boy: Li’l He 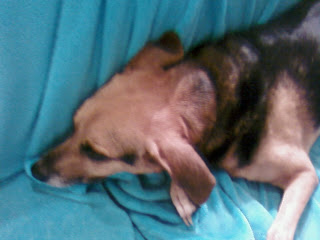 He lounges. On the couch. That’s pretty much all he does. A very sweet-natured dog, Riley tries to herd him. Yesterday, he didn’t get up on the couch fast enough, so Riley bit him in the butt. Oh, that Riley! He just doesn’t get that these are 40 lb. dogs, he is only 8 lbs., and it isn’t a good idea to bite them. We remain vigilant. Li’l He has a wonderful, mournful hound “bay”. Not often. Just enough to remind us he’s a hound. 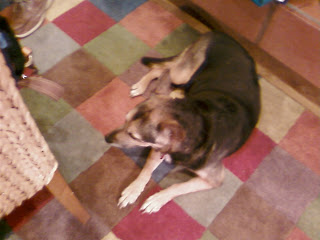 Tinker is terrier/German Shepherd/Heinz 57. She is aging and her hind legs are nearly crippled. But she is a happy, sweet dog. Riley is a little rough with her, and if he goes too far, she’ll go for him. It’s not pretty. But I don’t blame her. I’ve actually inserted myself between them to protect Riley because of his size. I suppose if this keeps up I’ll get bitten, accidentally. Tinker met Dr. Stu this week, because she’s been incontinent. She doesn’t appear to be in any pain, though. Tests are being run. Sweet, sweet dog.

The Definition of Ennui: Puddin’ 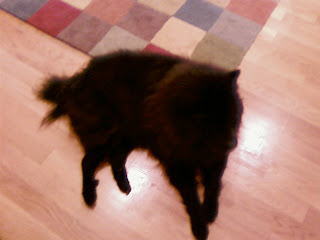 You’ve met Puddin’ before. When she came to visit. She’s a chow chow and usually dominant. She and Riley have an unusual bond. Puddin’ doesn’t allow any other dog to eat her food. But Riley can. Riley lords it over the others, too. He doesn’t even like kibble, but goes over to Puddin’s bowl, steals one kibble nugget in sight of the other dogs, and carries it off. Just to show them he can. Riley will not attack Puddin’ or bother her. Of course, nothing really bothers Puddin. She is a study in equanimity. I call her “The Rug,” because she just plops down wherever she wants and we step over and around her.

It’s hard to see her face because she is black on black on black. (Really dark dark brown) Puddin’ and Riley work together to protect the house. Pud has a fierce chow-chow bark, and she’ll sound the alarm if she thinks there’s an intruder. Riley then picks up the alarm and runs over to help. It’s a stitch, actually. Mutual respect between them, though.

The Tiny Terrorist, himself, resting up for another day of dominance. 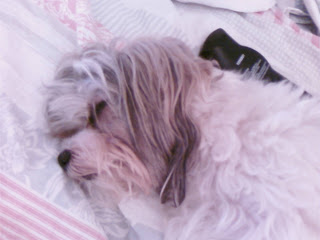