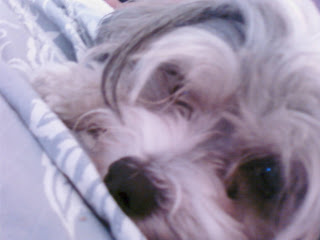 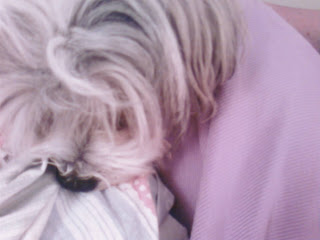 While I love posting about Riley’s antics, my pet family is expanding. We’ll have many, many stories, I’m certain, as the family blends. It could take over the blog.

Look for Sit! Saturdays — a weekly post on Saturdays about our pet family antics.

The cast of characters:

Leader of the Band: Riley, a two-year old, nine-pound maltipoo and the brains behind the operation. Picture him sitting behind the desk in a fedora, plotting. That says it all.

Puddin’: a six-year old, 42 lb. black/mahogany chow-chow, Riley’s consort, who tends to simper in his presence. Where he goes, she goes. Or she won’t go. And when a chow won’t go, well, you don’t go.

Little He: a 10-year old black and gold hound, who spends most of his time lounging on a sofa, eating dog bon-bons, and who MIGHT lift his head briefly if you call his name. If he feels like it. But when he hears good, old-time rock and roll, he jumps up and dances.

Tinker: Sweet, gentle Grandmere, at age 14, Tinker, the black and gold terrier, has earned her rest, which she usually takes near Little He and Puddin’. Bookends and a rug.

Rufus: A big ole orange tom with a strong sense of self; neutering hasn’t stopped his nightly wanderings, but I hope to. He’s a good big brother to

Gigi: the baby of the family: a spoiled, vocal two-year-old calico cat, Gigi thinks all dogs are her pals. Wait til she meets Riley.
That’s the family. Stay tuned….