A post in which I visit and pass judgment on a few wine tasting rooms, review Zazu restaurant and buy stuff…. revealing the good, the bad, and the ugly about the Sonoma wine country. 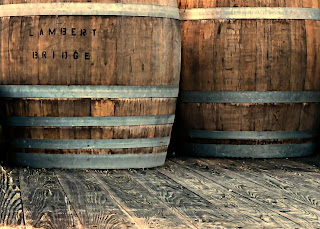 It’s spring in the wine country (even though it’s felt more like summer, with temps in the mid- 80s). What better excuse to visit Sonoma than to pick up our club wines at our favorite winery, Lambert Bridge, and to talk with them about my belated birthday celebration scheduled for the fall. {If you haven’t tried Lambert Bridge wines, you simply must. If you’re having dinner at our place, you will.}

Not that we need an excuse to take the two-hour ride to one of the prettiest parts of northern California. Which is what we did last week. 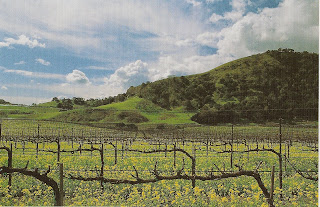 So, a little tasting was in order. First, at Lambert Bridge, where we said hi to the winery dog in residence, a huge yellow Lab. I do mean huge. The St. Bernard wasn’t working that day. And I made some plans. Florida girls coming in to celebrate my birthday, you are in for a treat! That’s all I will say.

Then, we dropped by Preston Vineyards to say hi to the cats. Equal time, you know!

A stop at the Raymond Burr Winery was irresistible. 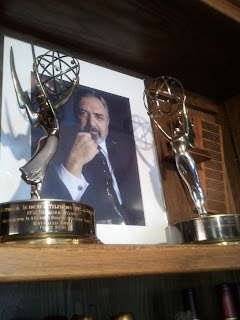 These are his Emmy awards for the famous TV show, Perry Mason, which you won’t remember unless you’re about my age. Or older. RIP, Mr. Burr. We were surprised at how small and cheesey the tasting room was. Very cool memorabilia, but badly displayed. The winery’s in need of some good marketing counsel. {Here I am!} 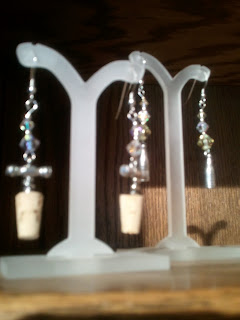 While there, I saw these ridiculous earrings with tiny dangling corks. Who in their right mind would wear these things? You’d have to be pretty shitfaced to even buy them. 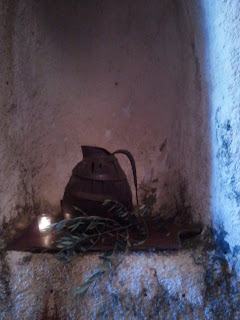 We tasted some interesting reds in the dark cave at Bella Vineyards. {Some were in that category of interesting that’s like the Chinese curse, May you live in interesting times.}

The tasting cave was all candlelit and romantically moody (see niche above) except that the cave roof was leaking and we had to dodge puddles and big drips of water. There were so many leaks I guess they decided it was better to have wet guests and puddles than put out six rainwater buckets. Tacky, tacky. 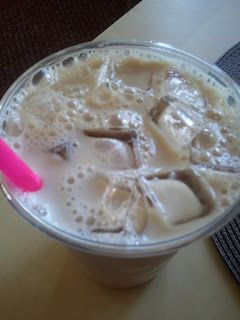 After a hard –and hot! day of wine tasting, nothing like a refreshing organic chai latte on ice at Cafe Noto in the charming little town of Windsor. I should have rubbed some of the tea on my skin–turns out one of the meds I take makes me photosensitive. Didn’t know that, but one sunburn later, I learned. Yikes! Stocking up on sunscreen ASAP.

Later, on the way to dinner, we ran into this scene in our hotel parking lot: can you tell it’s a beekeeper?. Oh-oh. 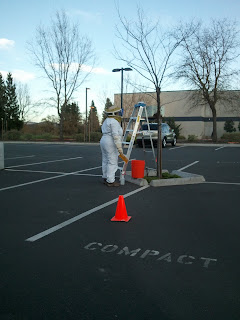 Yes, I could have used that outfit in the sun. Turns out, honeybees had swarmed all over this tree. Hundreds. Maybe thousands. You can’t tell because I kept a respectful distance.

A beekeeper had to be called, since execution is forbidden if bees have not broken the law. She convinced them that there were better digs at her place. The bees will be making honey in a new home, adopted by this honeybee keeper. Well, better her than me; I’m not a bee lover.

Dinner at Zazu Thursday night. Well-regarded restaurant and something we were looking forward to. Yeah, yeah, I know, you’re gonna tell me that Wine Spectator is a joke. I know. 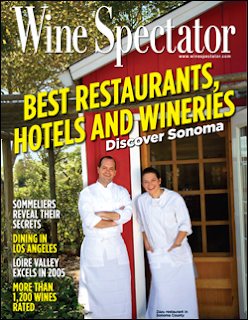 Thursday night, half empty restaurant. We were seated at maybe the worst seat in the house, or one of them, as servers were constantly coming and going past our table to get to and from the kitchen. But, at least we were in their line of sight, right? 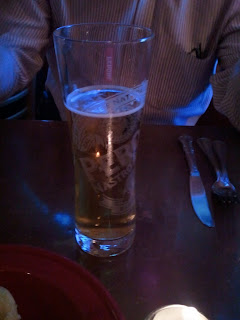 Our waiter came over to take our order. He was kind of goofy. My girlfriend told him that she was a pain about her food being hot, and that she’d send it back if it wasn’t. He was very nice about it. The cornbread arrived first. 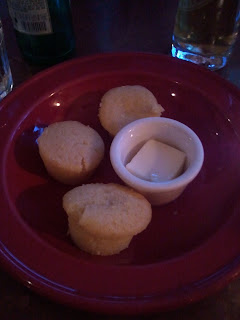 Ok, well, bread is too strong a word. These cornbread roll minis arrived. Now, I ask you, how hard is it to heat three baby rolls so they come to the table delightfully hot? I guess with a half empty house, they were too busy. And, a strange choice for starch in an area where there’s so much beautiful bread. So, teensy, not hot and they tasted like someone had run down to the local Safeway, picked up a package, ripped off the cellophane and plated them. 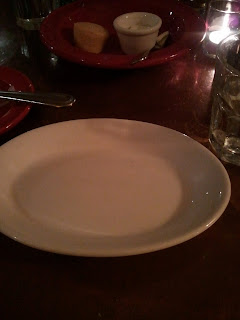 This is my empty plate. I show it to you because I got to stare at it for a complete hour. At the 45 minute mark, when our conversation lagged, we realized we had seen neither food nor our server. Could it be because he was also working the wine bar? And having a fight on the phone with his boyfriend? At that exact moment he appeared, apologizing for a mistake in the kitchen. I asked what had happened.

Ah. He must have forgotten to put the order in. How astute of him to recognize that yes, he was an idiot. And probably still is. And always will be. 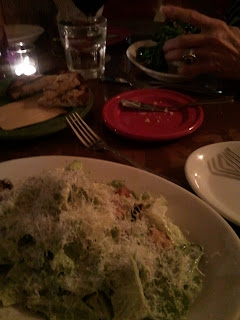 The Caesar salad we were to share appeared at the one-hour mark. It was…delicious. We had all ordered the flatiron steak. It looked beautiful on the plate, accompanied by cloves of roasted garlic, ruby chard and a few gorgonzola ravioli. 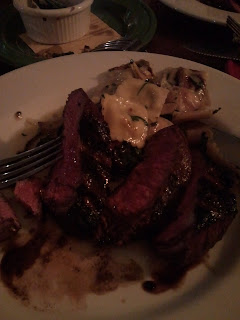 Mine was fine. In fact, excellent. But the other two, cold. My friend sent hers back. M. said his was tough, but he didn’t send it back. I enjoyed every bite of mine. It was delicious.

So, given that he’d kept us waiting an hour due to a mistake, and meals arrived cold, you’d think that the waiter would comp something, right? And he’d say “Again, sorry about the delay, we comped your wine or your appetizers.” Nahh. We never saw him again. The bill came. In full.

Oh, one of M’s beers wasn’t on it, but we were pretty sure the waiter just forgot. Because, as he reminded us, he is an idiot.

The bottom line on Zazu is this: GREAT food. REALLY, REALLY BAD service. It would be good for the owners to remember that a great restaurant offer more than great food.

After a great night’s sleep at a cheap but quite comfortable hotel in Santa Rosa {I’m keepin’ THIS secret!} we took a 30-mile drive to Sonoma and its cute little square. Shopping is abundant at adorable little holes in the wall and some shops big enough for a small truck to drive through. I bought this adorable watering can for our courtyard, where I’m going to let it weather and fade in the sun. 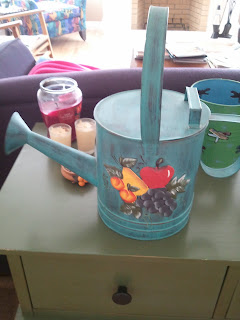 These plates are cute, no? 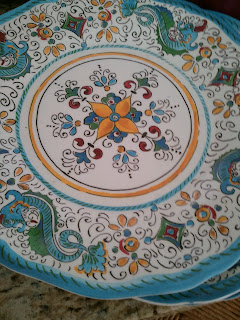 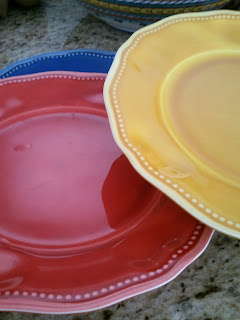 They’re melamine, and therefore perfect for patio dining. Patio dining is going to happen a lot now that the weather is warming up. In fact, it will probably be nice enough on Monday to dine alfresco and initiate our new plates: M’s brother will be here from Boston again to call on customers. And we all know how crazy about my brother-in-law I am. And no, these plates do not all match because, as you know, I am contrarian and do not like everything to matchy-match.

I’ll bet you’re wondering what M. was doing while my girlfriend and I shopped. Well, he was standing in front of various shops on his Blackberry practicing law. Not kidding. We shopped for two hours; he did conference calls and meetings by phone. Which is how I can afford to shop.

“She’s having so much fun, it makes me feel good,” he told my girlfriend. Oh yeah, I am one lucky bitch. I swear, God has the most amazing timing.

After shopping we had a quick lunch: BBQ’d tri-tip sandwich at the outdoor Plaza Grill at the Sonoma Cheese Factory and a Sam Adams beer. Yum. And then headed south and home to the dogs.

Yeah, sums up Sonoma. Going back next month if the heat doesn’t stop us. Because it gets mighty hot, and we know that I am done with hot. Sooo done.