Seals congregate to rest and relax near La Jolla Cove, just like tourists.
But this is the seals’ beach, and has been for more than 100 years.
It’s their rookery, where they birth and raise their young.

They always look so comfy in the sand, the epitome of relaxation.
Almost tourist-like in their love of sand and surf.

But unlike tourists, mama seals give birth right there.
Can you see the dark-colored mom and her newborn pup above?
I suspect it’s the same pup a friend saw being born the day before.
But there’s trouble in Paradise:
A small group of affluent La Jolla residents are fighting
to drive the seals from this beach,
a longtime seal rookery.
They want to restore the beach, which is fairly small,
so children can swim there.
At that particular
tiny
stretch of beach.
Tiny.
No seals, that’s what they want.
And some angry residents
are actually driving the seals off.
Physically chasing them off.
It’s a move reminiscent of Joni Mitchell’s song, Big Yellow Taxi:
They took all the trees
Put ’em in a tree museum *
And they charged the people
A dollar and a half just to see ’em

I guess they think that we don’t need to see these beautiful creatures in the wild,
not if it interferes with what humans want to do.
Like take their kids to a small beach seals use, when they live on a huge coast
with many, many beaches they can visit instead.
And then, I suppose, kids can visit a seal museum
where they can see stuffed seals in life-like panoramas. 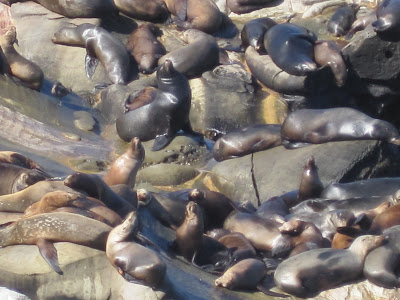 City camera footage showed an anti-seal activist chasing seals off at 3 a.m.
I’m sickened by this.
Seriously, folks. Is it really necessary for us to use every inch of nature
and leave nothing for its creatures?
We’ve already encroached on so much habitat.
Must we take it all?

Armed police and rangers are posted nearby
to protect the creatures.

What is wrong with these people?

This is the worst of human behavior, in my opinion,
this belief that we have to have it all. That it’s ok to torment nature’s creatures.
Thankfully, pro-seal activists are fighting back.
But why should they have to?
Why is being kind to God’s creatures so difficult for some people?
Why are people so self-centered and grasping?
Why do they not see what we stand to lose?

Treat Earth (and its creatures) well.
It was not given to you by your parents. It was lent to you for your children.