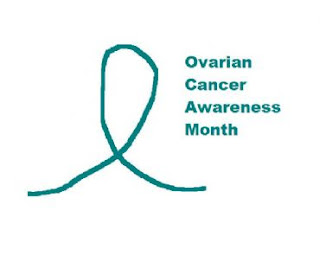 Bloggers I know are banding together to fight ovarian cancer by raising awareness of this silent killer. I support them. If you have a blog, here’s a contest you can enter. If you do not, page down and see the important list of symptoms. And if you see teal ribbons this month, you now know why.

September is Ovarian Cancer Awareness Month, and for the second year in a row, Sara of Ms Adventures in Italy and Michelle of Bleeding Espresso are hosting the O Foods Contest to raise awareness of this important health issue.

There are TWO WAYS to take part in the O Foods Contest:

TWO: If you’re not into the recipe thing, simply post this entire text box in a post on your blog to help spread the word and send your post url to ofoods[at]gmail[dot]com by 11:59 pm (Italy time) on Monday, September 28, 2009.

From the Ovarian Cancer Research Fund:

And remember, you can also always donate to the Ovarian Cancer Research Fund at our page through FirstGiving!

Please help spread the word about ovarian cancer.
Together we can make enough noise to kill this silent killer.