The Can of Worms 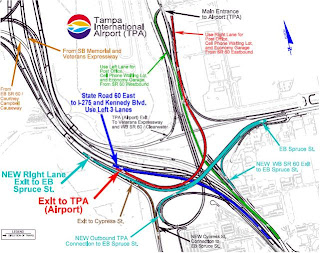 In my hometown of Rochester, NY, there is an interchange that’s so complex it’s locally known as “the Can of Worms.”

Strictly defined, a can of worms is a complex, troublesome situation arising when a decision or action produces considerable subsequent problems.

On my way home from taking a girlfriend to the airport before dawn this morning, I had to wonder. How could transportation engineers spend years “improving” the Tampa airport interchanges and exits, only to come up with their version of the Can of Worms?

Several people I know, me included a few months ago, upon exiting the airport, have found ourselves heading south over the Howard Frankland Bridge to St. Pete instead of north a mile to Tampa. And even today, I had to think hard to get in the correct lanes.

The same scenario applies on airport property, where getting to the terminal from the cell phone lot can send drivers on a merry goose chase out of the airport.

Yes, no doubt about it: the airport mess qualifies as a Can of Worms. Just look at the map.