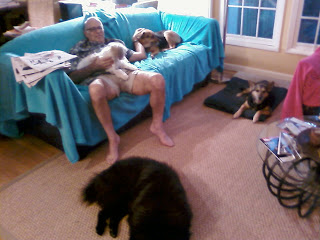 Oh, so much in this photo. First, note the new furniture throws, which did not exist before now.

Riley in Daddy’s lap. Little He the hound on the sofa. (He’s a nervous dog sometimes, so I call him Little Heebee Jeebie.) Tinker, the frail, ailing terrier on Puddin’s bed. And Puddin, whom I call “the rug”, and who always maintains her equanimity, regardless of the chaos around her. You may remember she was here a few months ago and already knows Riley.

First night in our new home
Last night, the dogs all got their groove on. Riley has established himself as the pack leader. Yes, he is smallest. But really, he’s the largest personality. This morning they are all on the patio doing the NYTimes crossword puzzle with M. I am inside trying to rest, because R. kept me up all night. Yes.

Why? Look at the photo. Who is missing?

Well, Gigi, the tiny cat, over whose existence Riley is OUTRAGED. If he even senses her, he goes berserk.

The cat is being terrorized.
She is in hiding upstairs, where the big dogs can’t go. They’re too steep for a little dog, as well– hardwood, no carpet to get purchase. Riley is afraid of them.

Gigi is a very sweet girl whose dogs love her–but Riley has never had a cat before. How they work will this out, I don’t know. But it only took one night to get the dogs integrated fairly well.

Rufus, the big yellow male, is also missing. He is in Miami. Oh yes. We left him. He got away from M. and gouged him. M. is on serious blood thinners, so quite a mess. Then M. got him a second time and rather than get gouged during THAT struggle, had to let him go. He went in hiding and would not come out before we left.

“Hey mon, I like it here. Ain’t goin to Tampa.”
Neighbors found him when he came out and are caring for him in M’s house; M. is going to have to go back to Miami next weekend to get him.

I have some serious concerns. Rufus is a mostly outdoor cat, but we live on the corner of a periodically busy road. Even if the cat-dog integration goes well, he’s going to be unhappy inside, and I am really nervous about his getting hit.

He was a stray who did this with his previous owners, and M. inherited him that way. He did not want to leave Miami, and didn’t. In the best of all scenarios, one of the neighbors would offer to adopt him. But I am not sure that is possible.

She’s mad as hell and ain’t gonna take it.
Riley just cornered Tinker one too many times on the patio, and there was a dog fight. No casualties, but this is problematic. They’ll just have to work it out. Our job is to prevent injuries.

Well, that’s the report from here. I have UT work to do today. M. has boxes of stuff scattered in this small house. Not sure he’ll get to them today. He worked hard yesterday to pack the van, then we had the drive and the stress of integrating the pack. I want him to rest.

I also need to rest. I had one hour of sleep the night before last, and then, last night, every two hours I was up with Riley barking.

I won’t mention the pee accidents.

For those of you who have always believed I was too much of an animal fanatic: I hope this illustrates that my case of animal love is mild, compared to what else is out there. My pet family has gone from a sensible “one small, portable, non-shedding dog for middle age” to “four dogs and two cats”.

But I love them all, already, I love my husband and we’re going to make it work.

Back in 1973, when I gave M. a small calico cat for his birthday, Sasha, I never imagined that we’d be sitting her all these decades later with a huge pack.