The god of frolic

Held securely in the back seat by me (so no airbag will deploy on sudden stops) with the window open just two inches or so, Riley enjoys a little breeze through his fur on a ride to the grocery store. He’s not allowed to hang his head out that far unless we are parked. (We’ve ordered a car seat.)

These are pretty new outings for him and he’s come to enjoy them, hopping into the car like a big dog all by himself. Once at the grocery store likes to peer out the window in a parking lot and survey the world from the safety of someone’s lap. (We never leave him alone in the car, he’d drive it off.)

Of course, he becomes a snarling blur of nasty when anyone approaches. This is just how he developed, this leash aggression, and we haven’t been able to train it out of him. Small dogs have nothing but their bluster, and that’s also true of Riley. He’s a high strung dog who firmly believes he has to protect us. Of course, some of this is my fault, I know.

But get him near children? Mushy stuffed dog with tail going a mile a minute and so ready to play! 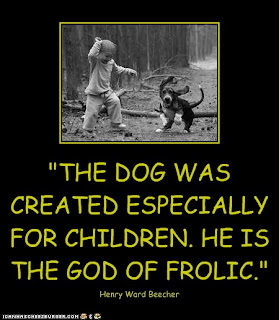 And then, there’s this: 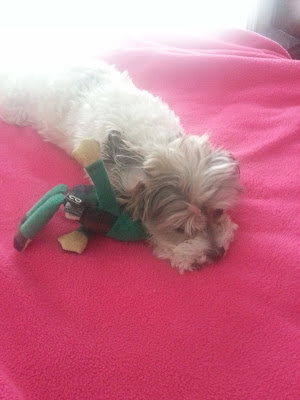 The sun had risen–glaring in the French doors in the bedroom, in fact– but Riley was still napping with his beloved Froggy.  One of his favorite Tampa dog sitters, Miss Christine, gave Froggy to him at least five years ago. And of course, Riley appreciates a good nap and takes one whenever possible. I wish I had that talent. 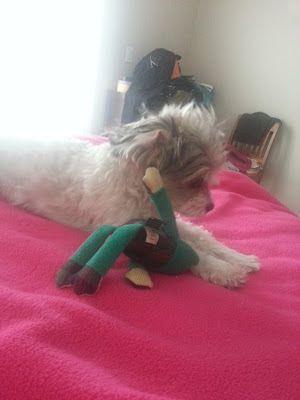 Riley decided to get up and do a little stretch, but Froggy seemed stuck in that one strange, yoga-like position. 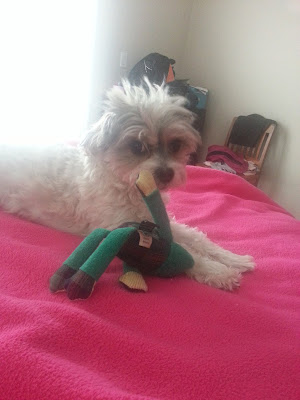 What’s this? A camera in my face?  Or a frog leg?  Notice that Ri hasn’t disturbed Froggy’s pose in the least. 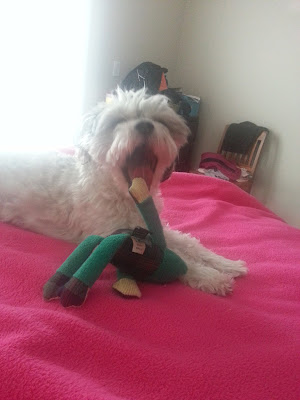 Ok, ok. I’ll get up. But first, let me oxygenate.  Froggy is so fit, he’s still holding that position. Oh, that I could do the same!

4 comments on “The god of frolic”